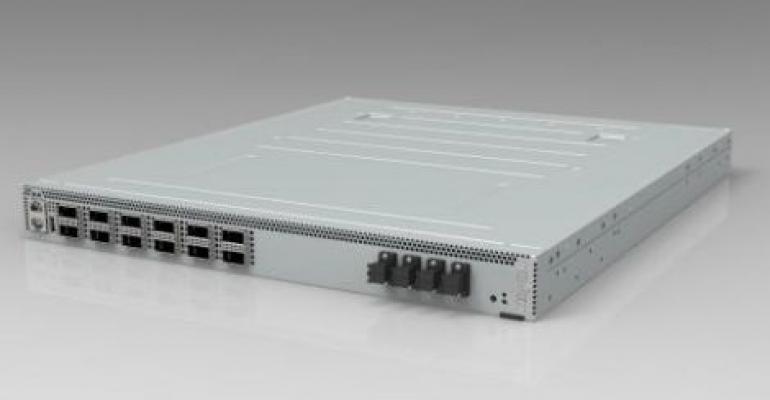 The first tests of a promising new technology in the U.S. based on Facebook’s open source switches, gets under way with the colocation leader in charge.

In a sign of how far the Open Compute Project’s communications offshoot, the Telecom Infra Project (TIP), has evolved since its formation just last February, Equinix announced this morning its intention to begin trial deployments of new packet-optical transponders, designed under Facebook’s leadership for TIP, in two of the colo’s International Business Exchange data centers.

The announcement is being made on the opening day of TIP Summit, being held at Facebook’s Menlo Park, California, headquarters.

“As the amount of global internet bandwidth required continues to grow, there is major emphasis on how to efficiently deploy fiber both within and between urban and rural areas,” wrote Parikh in a company blog post Tuesday.  “At Facebook, we believe that a key to efficiency is enabling open and unbundled solutions.

“To that end, our networking team has previously developed a series of projects aimed at breaking apart the hardware and software components of the data center network stack to open up more flexibility and accelerate innovation, as we previously did with our racks, servers, storage, and motherboards in the data center.”

This new solution incorporates some of the design and functionality of Wedge 100, the open source switch design that Facebook first open-sourced last year.  That device utilizes Broadcom’s Tomahawk ASICs, capable of driving 32 ports of 100 GbE.  To make it feasible to deliver error-free transmission over fiber distances as long as 180 km, Facebook is leading the development of an open optical technology it calls Open Packet DWDM.

“The open approach to development of optical packet systems will allow for faster time to market and a lower barrier of entry for new technologies, ultimately helping us move more quickly toward a more open and connected world,” wrote a team of Facebook engineers Tuesday.  “The contribution of Open Packet DWDM to TIP is a first step, and we look forward to collaborating further with industry partners to drive open packet and DWDM forward.”

That raises the Q value of the signal for higher reliability.  In initial tests of the Voyager design at SV3 and SV8, Equinix reports, preliminary results pointed to zero packet loss over 140 kilometers of production fiber.

Last March, Equinix announced the start of its direct collaboration with Facebook to develop a switch architecture around Wedge, and contribute their work to OCP.

TIP’s goal is to dramatically reduce the cost of providing cloud and network service providers with interconnection solutions.  In its statement Tuesday, Equinix characterized the cost requirements of providing such solutions with proprietary, hardware-centric designs as prohibitive and non-competitive.

Voyager meets the requirement of TIP’s charter, which called for initial submission of a white box transponder paired with an open line system in Q3 of this year, and a working prototype with OEM-delivered software in Q2 2017.  That charter also named Equinix CTO Ihab Terazi as co-chair of TIP’s Project Group, along with Facebook Director of Engineering Hans-Juergen Schmidtke.

In a company blog post co-authored by Schmidtke Tuesday, Facebook described Open Packet DWDM as the core of an entirely new class of “white box,” programmable network architectures, incorporating a class of component called an open line system (OLS).  In such a system, the line is disaggregated from the optical source, adding elasticity to the design.  Last August, photonics products-maker Lumentum announced its white box open line system — which it claims to be the first — and was validated by Infinera for use with its Intelligent Transport Networks portfolio for DWDM.  Lumentum is providing the OLS for Voyager.

Among OCP’s most influential members this year have been Verizon, AT&T, Deutsche Telekom (parent of T-Mobile), Korea’s SK Telekom, Spain’s Telefonica, and Britain’s Vodafone and EE.  Of those telcos thus far, Telefonica, Vodafone, and SK have signed on to the TIP project.

But the rest, including the US-based firms, have elected to stay on the sidelines with respect to TIP, prompting some concern in the telco space that they’re choosing to spend their time passively observing.  Possibly, until now, they have not had all that much to observe.  That could change once Equinix’ trials get under way.