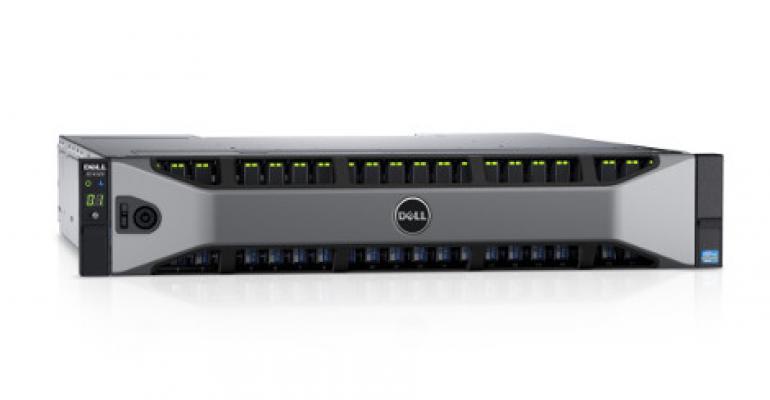 Dell announced a new series of full-featured enterprise data storage arrays, bolstering of its software-defined storage ecosystem and plans to broaden its portfolio with new converged server and storage appliances. Announcements were made at the U.S. Dell Forum event in Miami earlier this week.

The new Dell Storage SC4000 Series arrays are based on Dell's SC8000 platform and feature dual redundant controllers, 24 internal drives and eight ports of 8Gb Fibre Channel network access. The SC4020, the first entry in the SC4000 series, is a 24-drive 2U array that can scale up to 413 TB of raw capacity. Designed to provide the same advanced capabilities as enterprise-class arrays, the new series is able to support Fibre Channel and iSCSI connectivity.

Looking to be a blend of price and performance, the new array series is engineered to offer what some of the larger SANs do, but at a mid-sized SAN entry point. While it is an independent offering, it leverages technology from Dell's Compellent and EqualLogic product lines. The SC4000 series features the same intelligent data placement capability as the Compellent SC8000, as well as write-optimized flash (SLC) and read-optimized flash (MLC) drives.

"Dell has excelled historically as an innovator that brings full-featured storage capabilities to lower price points, helping the vast majority of storage customers to benefit from advanced features previously only available to the largest storage deployments,” said Arun Taneja, founder and president of market research firm Taneja Group. “With the Dell Storage SC4000 Series, Dell brings all of these capabilities, such as intelligent tiering, thin provisioning and snapshots, to a new breed of customers.”

In a new new agreement with Nutanix, Dell plans to offer customers the Dell XC Series of Web-scale Converged Appliances, which combine compute, storage and networking into a single offering, powered by Nutanix software. Dell's approach to software defined storage is to offer integration with open source platforms and leading hypervisor vendors to provide a variety of solutions to address various business requirements.