Switch plans to build a new data center campus in northern Las Vegas, which will add more than 300,000 square feet of mission-critical space for customers seeking redundant IT infrastructure. 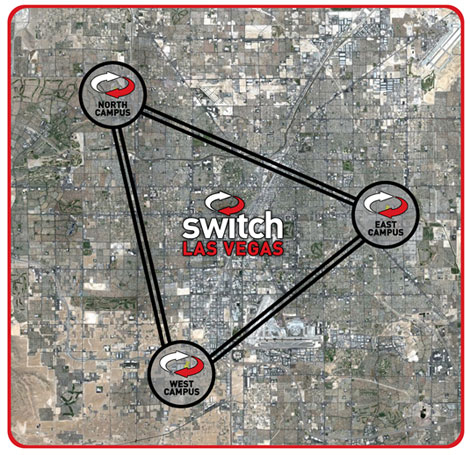 This satellite photo provides an overlay of the location of the Switch data center campuses in the Las Vegas area, including the new North Campus announced today.

Switch plans to build a new data center campus in northern Las Vegas, which will add more than 300,000 square feet of mission-critical space for customers seeking redundant IT infrastructure, the company said today. The Switch Las Vegas-North Campus will be located near the intersection of Cheyenne and Buffalo, roughly 15 miles north of the Las Vegas Digital Exchange Campus (LVDEC), the home of Switch's massive SuperNAP data center.

The new campus accelerates a building boom by Switch, which has already announced plans to construct 600,000 square feet of new data center space at the LVDEC campus in 2012. Both campuses will be built using a modular design developed by Switch, that incorporates many of the design innovations seen at the SuperNAP.

The company said the North Vegas expansion will focus on demand for "active-active" environments that allow customers to run operate redundant data centers that mirror data in real-time, providing instant failover in the case of an outage at either location. This approach that requires the facilities to be roughly 15 miles apart to satisfy latency requirements. Companies like Cisco and HP have adopted this approach, building two or more data centers in the same geographic market.

"Our customers are continuing to evolve and adopt the latest enterprise configurations," said Missy Young, Executive Vice President of Colocation for Switch. "The addition of Switch Las Vegas – North will provide our customers with three separate data center ecosystems that satisfy the latency ranges for Active-Active solutions.”

Switch has developed an Active Resilient Colocation solution for customers interested in taking advantage of the active-active configurations. Switch appears to have anticipated this trend, as stakeholders in Switch have owned the Switch Las Vegas – North property since 2003. The construction timetable for the new project has not yet been finalized.

The SwitchMOD (shot for Modular Optimized Design) is a standardized design that can be built and deployed in modules from 25,000 square feet to 100,000 square feet of space. The design integrates Switch’s T-SCIF high-density airflow containment systems and WDMD custom cooling units, which can switch between four different types of cooling based on outside conditions.

The SwitchMOD design is also being used for  SuperNAP NV-8 and SuperNAP NV-9 – are part of a major expansion by Switch on land adjacent to the 400,000 square foot SuperNAP, where the company envisions an immense data center hub spanning more than 2 million square feet. The 500-megawatt Las Vegas Digital Exchange Campus could house as many as 31,000 cabinets of servers upon its completion.