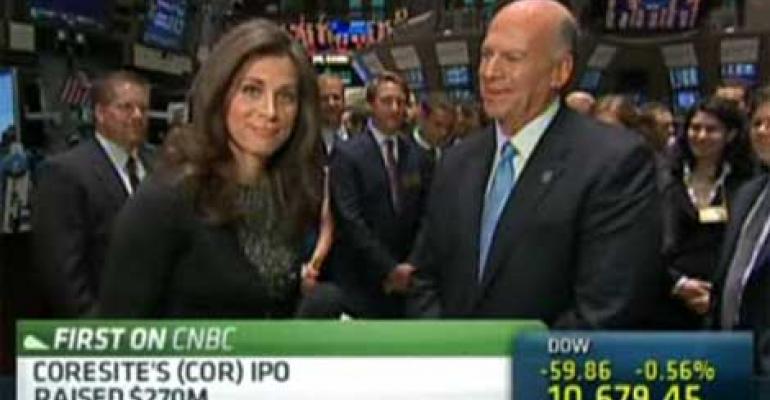 CoreSite CEO Thomas Ray (right) is interviewed by CNBC&#8217;s Erin Burnett on the floor of the New York Stock Exchange after ringing the opening bell to make Thursday&#8217;s IPO.
Companies>CoreSite

CoreSite Realty announced another record quarter of colocation leasing and occupancy, but analysts appeared stunned by the sudden departure of long-time CEO Tom Ray. Ray said on the Q2 earnings call that succession was an ongoing process -- but the final chapter which began in July, was swiftly completed in under 30 days.

Ray will be stepping down on September 10 after 15 years of service, and will be replaced as president and CEO by CoreSite lead director Paul E. Szurek. Szurek, who has served as a CoreSite board member since 2010.

Ray will continue in a consulting role through June 30, 2017. He said on this morning's Q2 earnings call, that a 12-month non-compete clause was part of his separation agreement.

Notably, CoreSite's ongoing leasing success creates challenges of its own, with an overall occupancy of about 92 percent. Given the record high facility utilization, it gets harder to fill in the remaining "nooks and crannies."

CoreSite announced two channel partnerships in June, with Fortune 100 Avnet and Ingram Micro, which could help to drive even higher occupancy across the portfolio from single cabinet deployments. 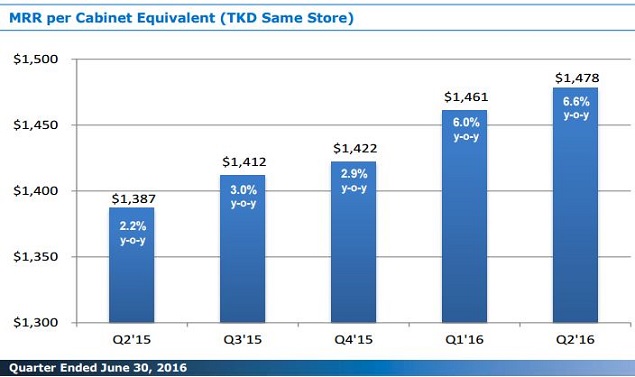 CoreSite's revenue per cabinet continued to increase, and along with stronger interconnection revenues than forecast, helped to drive EBITDA margins up to a healthy 52.6 percent.

There is no way for anyone besides Ray and the board to know what really prompted the sudden departure.

However, CoreSite's immediate challenge going forward does not change the need to purchase land in order to continue along the sector-leading profitable growth trajectory.

The company recently completed its final 48,000 SF phase in the red-hot Northern Virginia market. According to the Jones Lang LaSalle (JLL) July 2016 leasing update, 78 MW of wholesale space were absorbed during the first half of 2016. Meanwhile, there is plenty of dirt being moved, facilities being constructed, and land being banked by competitors looking to serve that wholesale market.

In Santa Clara, CoreSite expects to complete its final 230,000 SF SV-7 facility during the next few months. This facility is already 59 percent pre-leased. Much of the remaining space may be needed to serve smaller colocation and interconnection customers in the Silicon Valley.

Ray confirmed on the earnings call that CoreSite will be out of the wholesale data center leasing business for at least the next six to 12 months. He also discussed concerns regarding excess supply in the Bay Area next year, given the number of projects currently underway, permitted, or on the drawing boards.

If wholesale leasing demand by the hyperscale cloud providers continues during the next 18 months, Ray said the Bay Area market condition could be "healthy." However, it appears that cloud leasing roulette wasn't a game that Ray was willing to play in either Northern Virginia or the Silicon Valley in 2017.

Under Ray's leadership CoreSite delivered tremendous returns for shareholders. During 2015, CoreSite was the top performing REIT in any sector, with a total return of ~50 percent.

In order to put that into perspective, the MSCI REIT Index which tracks equity REIT performance across all the sectors only returned 2.52 percent in 2015. CoreSite's outperformance in 2015 helped to "unmask" the relative strength of data center REITs.

The first half of 2016 has been exceptional for the entire data center REIT sector, with incredible gains primarily driven by large wholesale leases from public cloud providers.

CoreSite again was the top performer delivering total returns of over 60 percent through June 30, 2016. Frankly, that is a tough act to follow.

CoreSite facilities are currently at 92 percent occupied, up 140 bps sequentially from Q1 2016. Filling up the final phases of large data center campuses is a low risk way to deliver high margins and ROIC for shareholders. However, by always allocating capital to the existing footprint, CoreSite would be unable to maintain the growth which supports the high earnings multiples for the stock.

It remains to be seen what direction the board will take with Paul Szurek at the helm. Chairman of CoreSite's board of directors, Robert Stuckey, said in the announcement that "Paul, an active and valuable contributor to the CoreSite Board, has been instrumental in providing oversight of the company’s growth and strategic direction."

In my view, CoreSite is now behind the curve when it comes to banking land for expansion in existing US markets. This is a situation which must be dealt with swiftly in order to deliver the growth that shareholders have enjoyed under Ray's rock-solid leadership.

If CoreSite were to announce a significant M&A deal to expand internationally, (InterXion immediately comes to mind), that would be an obvious change of direction. However, it would require morphing from a cautious posture to a higher risk approach to achieving growth.

On the other hand, data sovereignty is becoming a more pronounced trend, so there is a growing risk associated with not expanding overseas as well.