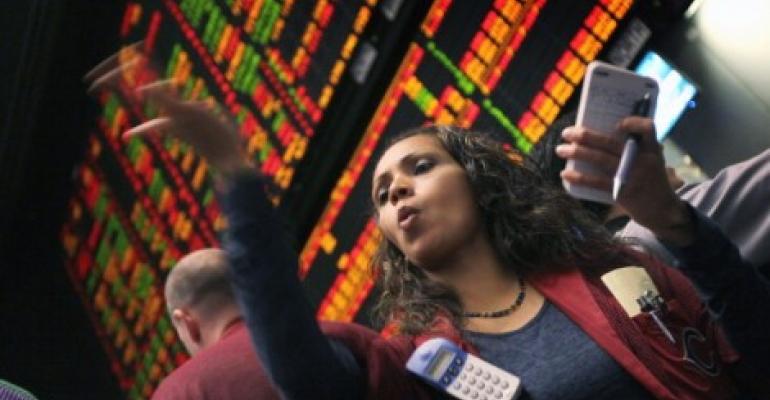 A trader signals offers at the CME Group in 2011. (Photo by Scott Olson/Getty Images)
Business

CyrusOne Rolls Out Five-Year Plan to Double Its Value

CyrusOne recently pulled off one of the biggest data center wins of 2016, buying in a sale-leaseback transaction CME Group's state-of-the-art data center to expand and offer colocation services in the red-hot Chicago market.

CyrusOne has enterprise DNA and Midwest roots going back to originally being spun-out of Cincinnati Bell.

During its 2016 Investor Day presentation earlier this month, the company rolled out a bold plan to double its enterprise value from $4 billion today to $8 billion by 2020.

CyrusOne estimates the annual data center spend for the entire Fortune 1000 at just over $15.5 billion. Currently, 173 members of the Fortune 1000 are generating $270 million in revenues for the data center provider. However, this represents only 10 percent of the $2.7 billion IT budget for these firms, leaving a long runway for growing revenues from the existing customer base.

CyrusOne can offer enterprise CIOs solutions which range from entire data centers down to a single cabinet. This helped drive record leasing of 30MW and over 200,000 square feet of data center space in Q4 2015.

The company's chief commercial officer Tesh Durvasula emphasized that the sales cycle to bring on a new Fortune 1000 customer is typically over two years. The wooing and eventual signing of Fortune 1000 member CME Group was no exception.

Notably, it was CME COO Julie Holzrichter who came to New York and described the arduous selection process which resulted in the sale of her "precious data center" in Aurora, Illinois, to CyrusOne.

Holzrichter, who has been with CME for 30 years, described the vetting process that started in 2012 as "putting 'em through the wringer," with CyrusOne coming out the other side as the only logical choice.

CME customers are interested in how to monetize information in order to manage risk. By co-creating a robust ecosystem with CyrusOne, Globex trading customers will gain more real-time information to support trading decisions. 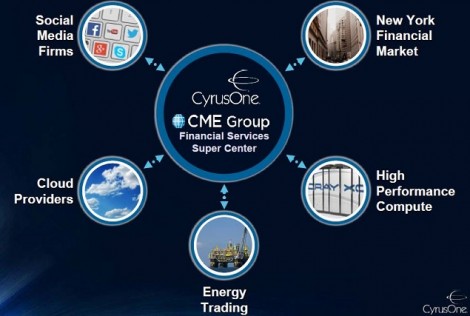 By partnering with CyrusOne, CME is able to expand its service offerings to customers, including: disaster recovery, cloud access, data storage, and high-performance computing.

As part of the $130 million sale, CME will enter into a 15-year lease for data center space and will continue to operate its electronic trading platform, CME Globex, from the data center and offer colocation services there. There are 14 acres on the campus for future expansions.

In hindsight, the acquisition of Cervalis, and the recent announcement of expansion plans into Northern New Jersey, are all part of a much larger FinTech strategy for CyrusOne.

A plan to grow revenues from about $500 million to $1 billion annually in just five years was the central focus of the Investor Day presentation.

On average, 65 percent of growth is projected to come from existing customers, with the balance achieved by new customer acquisition, growing interconnection revenues, and strategic M&A. 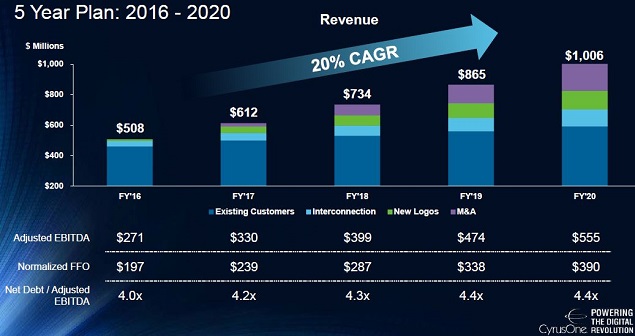 Notably, this 20 percent annual growth is projected to be achieved while maintaining balance sheet leverage below 4.5 turns. This is quite low compared with other REITs attempting to grow at this rapid pace and should help CyrusOne achieve an investment grade rating.

CyrusOne's interconnection revenue is growing 300 percent faster than overall revenues. This fast growth is off of a relatively small base, which now represents 6 percent of revenue.

By way of comparison, connectivity-focused Equinix and CoreSite Realty derive about 16 percent and 13 percent of revenues from interconnection, respectively.

Connectivity is a high-margin business, and CyrusOne is in the early innings of assisting enterprise customers to shift certain applications from legacy data centers over to the cloud.

Since the CyrusOne IPO in 2013, the "Massively Modular" data center design has continued being refined in conjunction with design and construction partners. New data centers are currently being constructed for $6.5 million per MW -- down from $7 million at the 2013 IPO -- with the goal of achieving $5.5 million by 2020.

Construction schedules have been accelerated from eight to six months for new shells, and data halls are now completed 25 percent faster, in just 12 weeks. Delivering data halls at the lowest cost and shortest time while maintaining high levels of facility utilization are critical to getting mid-teen returns on invested capital.

Managing the balance sheet in order to achieve a future investment grade rating helps lower the cost of capital to fund the five-year growth plan.

CyrusOne shares are already up 16 percent in 2016 year-to-date.

CyrusOne issued new guidance during its Investor Day presentation, increasing revenue and EBITDA for 2016. However, the 2016 midpoint guidance of FFO per share remained unchanged at $2.51, a 17.5x multiple at current levels.

Given management's five-year plan to double revenues by 2020, the FFO multiple still appears to be reasonable, despite shares registering another new all-time high of $43.98 per share.

The Raymond James $51 price target implies a potential 12 month price upside of 16 percent from here -- a total return of 18.5 percent, including the 3.5 percent dividend.