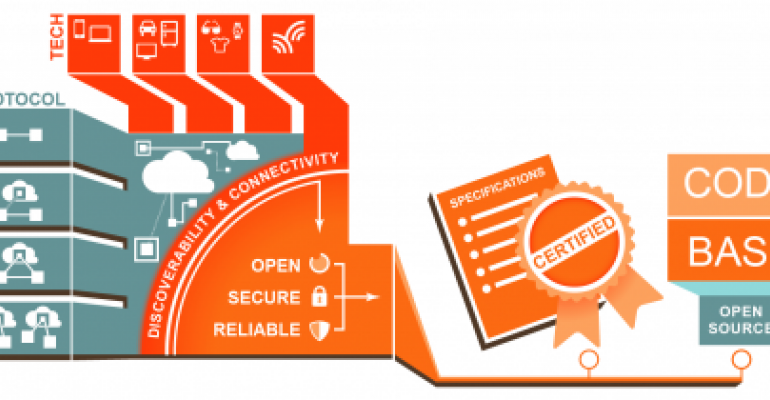 The consortium launched in 2014 and saw membership jump to 50 companies. (Source: OIC)
Internet of Things

The Open Interconnect Consortium has launched the initial release of its standard for machine-to-machine communication as preview. The standard is called IoTivity. It is being developed as an open source project hosted by the Linux Foundation.

IoTivity is an open source framework for the Internet of Things. The Intel-backed consortium is tackling the rise of network-connected devices and technical issues that may be associated with it. Since many different devices and servers they talk to come from many different vendors, there needs to be some common communications standard. OIC plans to release a reference implementation soon.

The IoT standard project includes RESTful APIs and will be available in various programming languages for a variety of operating systems and hardware platforms.

The open source approach plays a big role in IoT as well as in cloud computing because it is the best instrument for bringing together all stakeholders in a collaborative effort and ensure interoperability.

"We believe that an open source project combined with the OIC's standards efforts is critical to driving true interoperability for the billions of IoT devices that will be coming online over the next few years," Mark Skarpness, director of embedded software in Intel's Open Source Technology Center, and chair of the IoTivity Steering Group, said in a statement. "We are pleased to be working with The Linux Foundation and the open source community to advance the project."

IoTivity is governed by an independent steering group that liaises with the OIC. OIC was founded in 2014 and saw its membership jump to over 50 companies during the year.

451 Research reported that 2014 was a record mergers and acquisitions year in the IoT space. A recent report from IDC said that half of IT networks will soon feel the stranglehold of IoT devices.

In addition to the open source implementation, the IoT standard will include IP protection and branding for certified devices (via compliance testing) and service-level interoperability.

"The ability for devices and machines to communicate will unleash a whole new world of technology innovation. Open source software and collaborative development are the building blocks to get us there," Jim Zemlin, executive director at The Linux Foundation, said in a statement. "IoTivity is an exciting opportunity for the open source community to help advance this work."

The IoTivity project is licensed under the Apache License version 2.0.