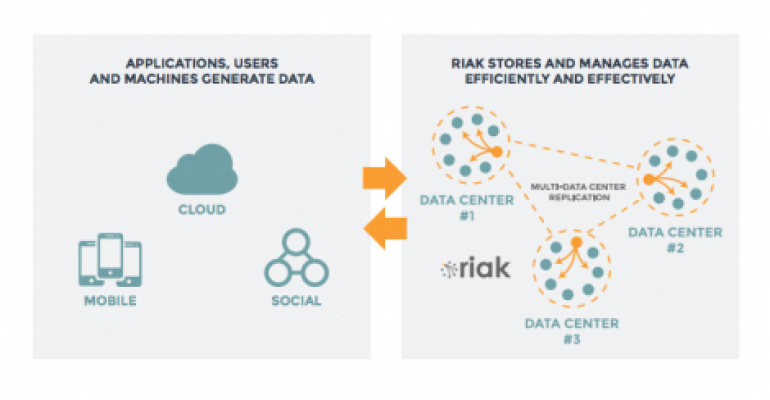 Basho Technologies, creator of the distributed NoSQL database Riak, has closed a $25 million Series G funding round on the heels of solid growth numbers. The financing is being used to expand development and marketing activities.

Basho's focus in Enterprise Riak is on distributed database needs at scale.

Adam Wray, former CEO of Tier 3 was named CEO of Basho in March. "I recognized the trends at Tier 3 and that’s what brought me here," said Wray. Tier 3 was acquired by CenturyLink and is playing a huge role in CenturyLink’s cloud ambitions.

Basho has positive momentum in terms of customer adoption and product enhancements. Bookings were up significantly and the Riak roadmap looks strong, according to the company's management. Strong bookings were complemented by longer contracts, average contract length increasing to longer than years.

About half of bookings were new customers, Wray said. The company often competes with Cassandra for new customers.

"There’s three main drivers to our business," said Wray. "Hybrid cloud is creating distributed needs. There’s big data, collecting everything for context, which has gone from Fortune 100 territory down to the mid-tier. Then there’s the Internet of Things. Most of these are geographically dispersed and are going to push the concept of scale to new levels."

NoSQL popularity is on the rise. According to Forester, NoSQL enterprise adoption is at 20 percent and this is expected to double by 2017. Oracle has entered the NoSQL fray and continues to beef up its offerings.

“IT is increasingly looking to NoSQL databases to address the challenges and opportunities related to big data, as they see the proven and measurable benefits,” said Wray via email. “NoSQL technologies are maturing, and are now globally scalable, highly available, and less expensive to operate than traditional RDBMS solutions.”

“Riak and Riak CS have extremely strong product roadmaps for 2015 and sales momentum is impressive,” said Chester Davenport, Basho chairman and managing director at Georgetown. “With Series G funding secured, I have confidence Basho will establish itself as a leading unstructured data solutions provider in 2015.”