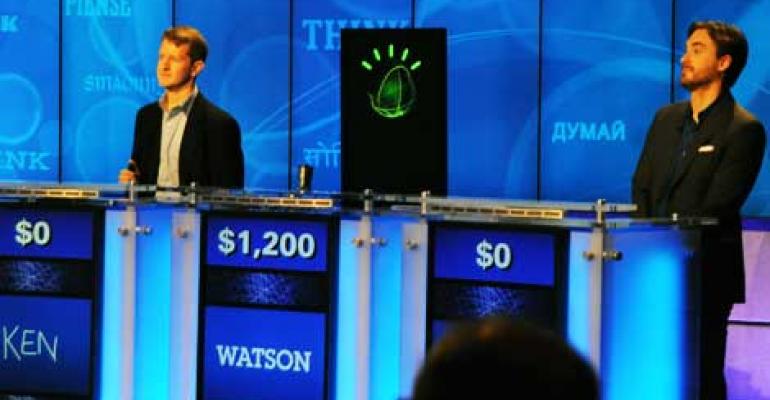 Called Watson Discovery Advisor, the first Watson cloud service is for research teams needing to analyze large amounts of data to identify patterns and come up with research ideas.

The move is a bid to commercialize Watson. Watson is famous for beating human contestants on Jeopardy three years ago. Since then, it has become smarter with a 2,400 percent improvement in performance, grown 24 times faster, and is 90 percent smaller - IBM has shrunk Watson from the size of a master bedroom to three stacked pizza boxes.

And this is just the beginning of its career in business and research applications. IBM says the next milestone in cognitive computing is accelerating scientific and industrial research. It’s a massive market, with the top 1,000 research and development companies spending more than $600 billion in 2013 according to Strategy&.

IBM's Watson Discovery Advisor is designed to scale and accelerate discoveries by research teams. It reduces the time needed to test hypotheses and formulate conclusions that can advance their work.

Watson learns from data instead of being explicitly programmed to carry out instructions. It consists of a collection of algorithms and software running on IBM’s power line of servers. Building on Watson's ability to understand nuances in natural language, the Watson Discovery Advisor service can understand the language of science, such as how chemical compounds interact.

“On average, a scientist might read between one and five research papers on a good day,” said Dr. Olivier Lichtarge, the principal investigator and professor of molecular and human genetics, biochemistry and molecular biology at Baylor College of Medicine. “To put this in perspective with p53, there are over 70,000 papers published on this protein. Even if I’m reading five papers a day, it could take me nearly 38 years to completely understand all of the research already available today on this protein. Watson has demonstrated the potential to accelerate the rate and the quality of breakthrough discoveries."

Watson has application in several domains. IBM provides a few potential areas where the service is applicable: