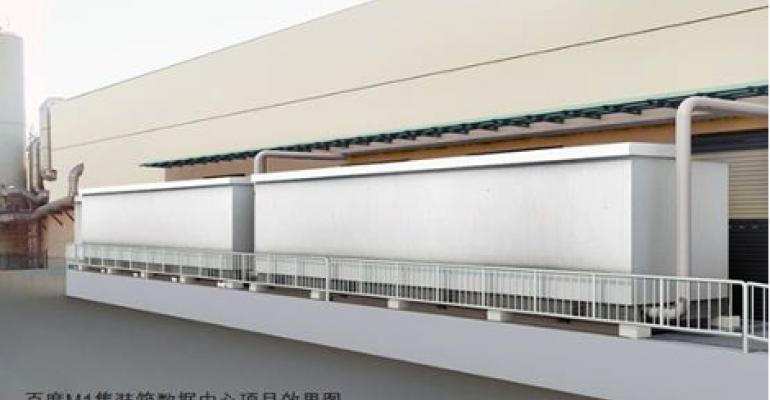 The containers are a full-package deal, including everything from electrical and cooling infrastructure equipment to data center infrastructure management (DCIM) software. This is the first time Baidu has deployed pre-fabricated data center modules, according to Schneider.

Pre-fab modualr data centers are a niche solution, generally used for quick capacity expansion, deployments in places where it is difficult to build traditional brick-and-mortar facilities or for mobile deployments, such as in combat zones or oil fields. Some data center providers, such as IO and Colt, also use pre-fabricated modules to build out capacity for their customers.

The modular data center Schneider has built for Baidu is called M1. They are tailored to the customer’s specifications and include in-row cooling, IT cabinets, UPS, cable management, fire suppression and access security.

Insulated wall panels make the containers – which are deployed in open air – weatherproof.

Baidu has shown in the past that it is willing to experiment with unorthodox technologies in building out its IT infrastructure. It has collaborated with Facebook and the Open Compute Project to redesign the data center rack and deployed servers powered by processors based on the ARM architecture – a low-power architecture used primarily for mobile devices.

This is not the first time Baidu has worked with Schneider. The vendor supplied IT cabinets and UPS systems for its data center in Yangquan and manufactured the aforementioned custom racks – a design effort codenamed the “Scorpio Plan.”

Schneider has been ramping up its pre-fabricated modular data center play quite aggressively over the past several years.