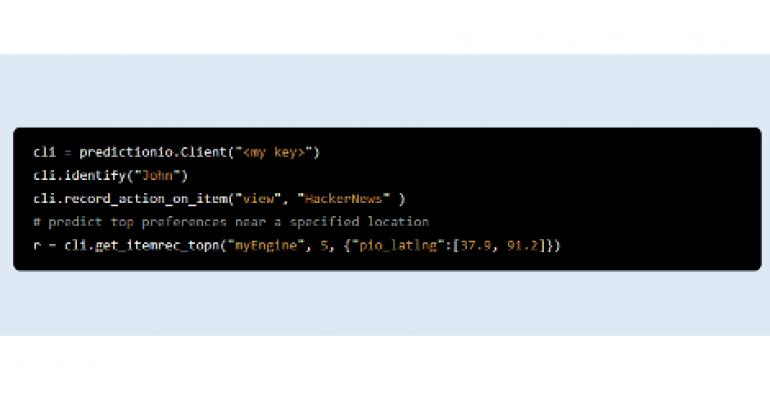 PredictionIO has quietly raised $2.5 million in funding to make machine learning accessible to developers. Dubbing itself “the MySQL of prediction,” the company’s Open Source Machine Learning Server is already empowering hundreds of applications and more than 4,000 developers.

The server is for programmers and developers to build smarter stuff with just a few lines of code. Building machine learning into products is expensive and time-consuming, and larger companies like Google, Amazon and LinkedIn all have sizeable teams of data scientists. The tools are available today to build machine learning deployments, such as R, Hadoop, Spark, Mahout and Scikit-learn, but it does not make sense for most companies to build a database server in-house. PredictionIO says you don't have to build it from scratch.

Its differentiators are being developer friendly and open source as opposed to closed black-box machine learning services and software out there. Developers don’t like black-box solutions, which is partly why offerings like Hadoop and Docker have grown popular.

PredictionIO gives away a free machine learning server for developers to destroy and re-define as they learn. Developers can download and install PredictionIO CLOUD from the AWS marketplace and experiment. App event data is streamed into PredictionIO through REST APIs or with a few lines of code using Software Development Kits (SDKs). Prediction engines can be created using the PredictionIO User Interface, with prediction results retrievable through REST API calls.

The company was started by young serial entrepreneurs, an ex-Googler and alums from UC Stanford, UC Berkeley and University College London (UCL). Co-founder and CEO Simon Chan is a PhD candidate at UCL and has founded three startups in the past.

It is drawing interest ranging from individual developers to international enterprises in verticals such as e-commerce, fashion suggestion, retail, food delivery, video portals, app stores and news media. Some examples are Le Tote, who is using PredictionIO to predict customers’ fashion preferences, and PerkHub, an enterprise Software-as-a-Service company that powers perks and group buying programs within large enterprises. PerkHub is using PredictionIO to personalize product recommendation in its weekly emails.

What Containers and Kubernetes Mean for Colocation Data Centers
Jul 20, 2020