Equinix plans to build a massive data center campus in Ashburn, Virginia, not far from its existing interconnection hub in the heart of northern Virginia's "Data Center Alley." The company has submitted plans to build a gargantuan development with more than 1.16 million square feet of space. 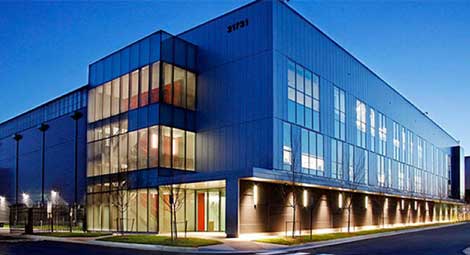 The Equinix DC-11 building, which is the newest of the company's 11 data center facilities in northern Virginia. (Photo: Equinix)

Equinix plans to build a massive data center campus in Ashburn, Virginia, not far from its existing interconnection hub in the heart of northern Virginia's "Data Center Alley." The company has submitted plans to build a gargantuan development with more than 1.16 million square feet of data center space at the intersection of Loudoun County Parkway and the Washington & Old Dominion Trail.

Equinix plans to build six buildings at the site, which is just south of the Washington Redskins training complex. Equinix has 11 existing data centers in northern Virginia, where its data centers serve as the key intersection for many of the world's largest networks.

The new facility would secure a long-term growth plan for Equinix in the critical northern Virginia market. It also raises fresh questions about the amount of data center supply in the Ashburn market, which is the focus of an extraordinary level of data center construction and development.

Equinix has consistently grown in northern Virginia, with its most recent expansion being the opening of its DC11 facility in May of 2013. That 230,000 square foot data center added room for 120,000 square feet of colocation space, with an initial phase of 42,000 square feet. DC11 sits on a single campus with seven other facilities totaling more than 500,000 square feet of data center space. The planned project means the Equinix footprint in Ashburn will skyrocket.

Plans are in place to create 8 million square feet of data centers in Data Center Alley by the end of 2014. Planned projects include CyrusOne’s 420,000 square foot facility, and Dupont Fabros’ 446,000 square foot ACC7, which is nearing completion. RagingWire secured $230 million in expansion capital, which will help support an announced expansion in Data Center Alley. The planned Equinix campus will add a significant amount of retail colocation in the market, and is large enough to impact supply in the area, furthering raising the bar for competition.

Several factors make northern Virginia attractive for data center development. Power costs are low with Dominion Power very accommodating to the data center sector. The connectivity is rich, as the very foundations of the Internet were formed here with major companies like AOL and Equinix setting up shop in Northern Virginia in the 1990s. Additionally, tax incentives are extremely friendly in Virginia.

Director of Economic Development in Loudoun Buddy Rizer has stated on numerous occasions that there hasn’t been a day in five years that hasn’t seen data center construction. The new Equinix data center campus would create about 70 jobs.

Ashburn is the key East Coast data center market along with the New York Metro, acting as a key communications hub for U.S. East Coast and European markets. There’s a high concentration of IT, Telecommunications, biotech, federal government, and international organizations looking to set up shop in the area.

Equinix’s campus is the key campus, with over 10,000 cross connects, 900 networks and direct access to 90 percent of internet routes.  The proposed plans are extremely aggressive, perhaps as a move to maintain its strength in the area going forward.