Shares of CoreSite Realty Corp. began trading on the New York Stock Exchange today as the company completes its initial public offering. Shares of COR, priced at $16, and ended their first session at $16.01. 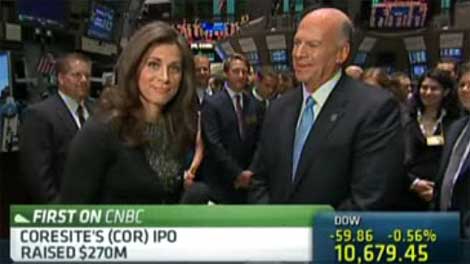 CoreSite CEO Thomas Ray (right) is interviewed by CNBC's Erin Burnett on the floor of the New York Stock Exchange after ringing the opening bell to make Thursday's IPO.

Shares of CoreSite Realty Corp. opened begin trading on the New York Stock Exchange today as the company completed its initial public offering. The CoreSite executive team rang the opening bell at the NYSE at 9:30 a.m. to mark its IPO under the symbol COR. The company's stock began trading at at $16, at the midpoint of the expected $15 to $17 range, meaning the offering will raise about $270 million. COR closed its first day of trading at $16.01 per share, up 1 cent on the day.

CoreSite offers finished “wholesale” data center space, which has been in high demand as end users seek turn-key space that can be deployed quickly. The Denver-based company will become the third data center REIT, following in the footsteps of Digital Realty Trust (DLK) and DuPont Fabros Technology (DFT).

CoreSite plans to use the proceeds of the IPO to repay debt and develop additional data center space, according to its SEC filing. The company operates 11 data centers in major markets around the U.S., comprising a total of 2 million square feet of rentable space. CoreSite also has the capability to add another 1 millions quare feet through the redevelopment of vacant space in existing buildings (481,000 SF) and building 496,250 square feet of new data center construction on land it owns.

CoreSite is affiliated with the huge private equity firm The Carlyle Group. CoreSite Realty will function as the operating unit of CoreSite LP, which will own the company’s 11 data center properties.