<img src="/sites/datacenterknowledge.com/files/wp-content/uploads/2010/05/dlr-DallasRibboncutting.jpg" width="475" height="425" /> A development team led by Digital Realty Trust (DLR) plans to invest as much as $488 million in transforming a former Alcatel campus near Dallas into 800,000 square feet of data center space. 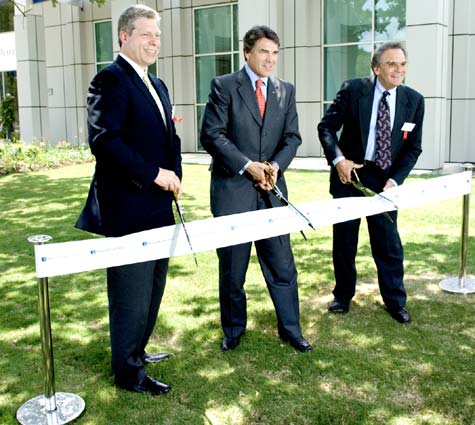 A development team led by Digital Realty Trust plans to invest as much as $488 million in transforming a former Alcatel campus near Dallas into a huge data center development. Digital Realty held a grand opening ceremony Wednesday in Richardson, with Texas Gov. Rick Perry on hand to participate in the ribbon cutting.

Expanding in Telecom Corridor
The Richardson area has earned the nickname "Telecom Corridor" for its heavy concentration of telecom and data center providers. Even in this setting, the scope of Digital Realty's ambitious project was hailed as an economic boost to the local community. The company expects the construction and operation of Datacenter Park Dallas will create 172 jobs this year and 1,225 jobs through 2015.

"The ability to rebuild, reinvent and repurpose entire industries is key to economic survival in this increasingly competitive world," said Perry. "Over the last few decades in this country, we’ve seen a number of city, state, and even regional economies decimated when core industries fade away, move overseas, or get shouldered aside by newer technology.

"This facility shows that Texas is still competing and winning because of hardworking visionaries and committed economic development organizations who are willing to think bigger and work harder than anyone else," said Perry.

By the time the park is completed, the annual power bill for the Datacenter Park Dallas could reach $52 million, according to Digital Realty. One data center has already been leased to a Fortune 500 global company, and another to a “leading IT service provider” (a previously announced lease to Terremark Worldwide).