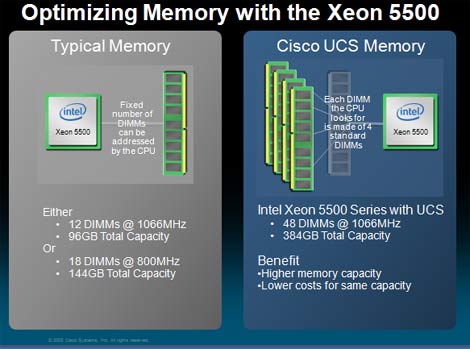 But even as Cisco was unveiling its new technology and pricing, the vendor lanscape continued to shift around it, as reports emerged that IBM plans to forge a deeper relationship with Cisco rival Brocade Systems (BRCD). Big Blue said it would begin selling switches and routers from Foundry Networks, which Brocade acquired last year.

Cisco said it has boosted the memory capacity of the Xeon 5500, using a custom ASIC (Application Specific Integrated Circuit) to provide the processor with a four-fold increase in the number of memory modules it can access. This expands a UCS Xeon 5500 system from 144GB to 384GB, and also gives users the option of using more affrodable memory configurations.

"The server industry has been memory-bound for some time," said Paul Durzan, director of the Server Access Business Unit at Cisco. "We've developed a technology to expand the memory of a two-socket server."

The Unified Computing System brings together hardware - including the new B-Series blade server and network adapters - that seamlessly connect with storage systems over a high-speed unified network fabric powered by Cisco’s new Nexus family of switches, enabling virtualized assets to move seamlessly across the data center and the Internet. Cisco is also introducing new UCS Manager software to centrally manage and provision resources.

Durzan says Cisco won't charge customers for UCS Manager, attacking the cost model for competing systems that charge for management software via a per-blade license. The system will use Service Profiles that can be applied  to blades, allowing for rapid load shifting or repurposing of hardware.

"Whether you have one blade or 320, you manage it with one management system," said Durzan. "That really reduces the complexity and will cut down costs. By not tying management to a blade itself, it allows you to quickly change the personality of a blade. It's really designed to allow the data center to be more flexible."

In a webcast this morning, Cisco outlined pricing information for various UCS configurations, which range from $96,000 for an eight-blade chassis to $2.5 million for a full 320-blade server setup. Cisco included cost comparisons with 'legacy systems" suggesting potential savings of 13 percent with eight blades and 71 percent for the 320-blade installation.