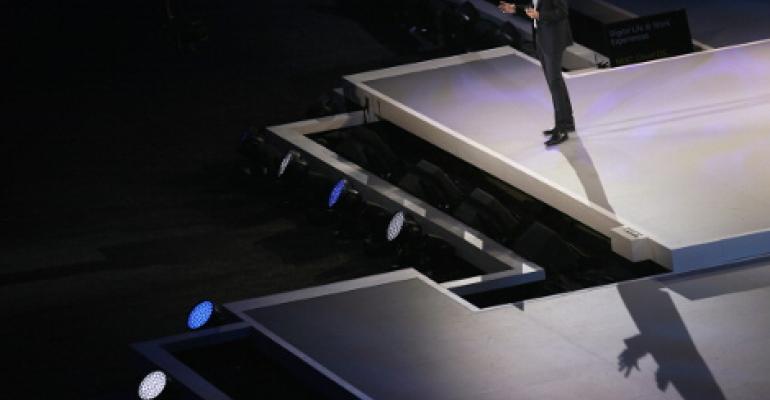 Profit excluding certain items, such as a few weeks of results from newly acquired LinkedIn Corp., was 84 cents a share on adjusted sales of $25.8 billion, the software maker said Thursday in a statement. Analysts on average had estimated profit would be 79 cents on revenue of $25.3 billion in the period ended Dec. 31, according to data compiled by Bloomberg.

Chief Executive Officer Satya Nadella is reformulating the company as a seller of internet-based corporate services for running applications, storing data, collaborating and enhancing worker productivity. Azure cloud services revenue almost doubled, keeping up its steady pace of growth, and both consumers and corporations continue to purchase Office 365, which includes software like Word and Excel, Microsoft said. Another surprising bright spot was the PC market, which is showing signs of life after years of contraction.

On Dec. 8, the company completed its biggest acquisition, the $26.2 billion purchase of LinkedIn, whose data and professional networking tools will augment Microsoft’s own productivity products. LinkedIn contributed revenue of $228 million in the quarter following the deal’s close.

Microsoft shares gained 1.2 percent in extended trading following the report. The muted reaction to the better-than-forecast results followed the stock’s 23 percent surge in the past year to an all-time closing high of $64.27, reached Thursday in New York.

Redmond, Washington-based Microsoft has been spending on data centers and adding products to win new cloud customers. Chief Financial Officer Amy Hood said in July that gross margins, a measure of profitability, for the commercial cloud business would "materially improve" in the current year. That’s because previous years of investment are starting to pay off as those data centers support more customers. Second-quarter commercial cloud gross margin was 48 percent, 2 percent wider than a year earlier.

Microsoft has pledged to reach annualized revenue of $20 billion in its corporate cloud business by the fiscal year that ends in June 2018. That metric stood at more than $14 billion at the end of the second quarter. The company has been adding customers for its Azure services, which let clients run and store applications in Microsoft’s data centers, as well as for cloud-based versions of Microsoft’s Office applications. During the quarter, Microsoft announced a corporate chat service called Teams, aimed at taking on Slack Inc.

"Microsoft is the plumbing in the cloud," Moerdler said. "Amazon is much bigger, but still Amazon and Microsoft are pulling away from the pack. More and more you hear CTOs talking about both, or more of them are talking about Microsoft that weren’t before."

Revenue in the recent period was lowered by 2 percentage points because of a strong dollar, said Hood, who had forecast a smaller impact.

"It was a bit more of a headwind," she said.

Second-quarter sales in the company’s More Personal Computing business, including Windows and Xbox, fell 5 percent to $11.8 billion. That compares with the $11.44 billion average estimate of five analysts polled by Bloomberg. Gaming revenue for Xbox and PC fell 3 percent.

Worldwide PC shipments in the December quarter declined 1.5 percent, a slower pace than in the previous period, but the industry remains in a multiyear slump. The company is seeing the market stabilize and even improve, and Windows sales are doing even better than the overall PC market, Hood said.

"That segment outperformed even more than with the others," she said of the More Personal Computing unit.

Revenue from sales of Windows to PC maker partners rose 5 percent, and Windows commercial products and cloud services increased at the same rate. Windows sales are growing in the corporate PC market and among consumers purchasing pricey machines, and Windows PC makers were able to take some share from Apple, Hood said.

Including LinkedIn and other items, net income in the second quarter rose to $5.2 billion, or 66 cents a share.