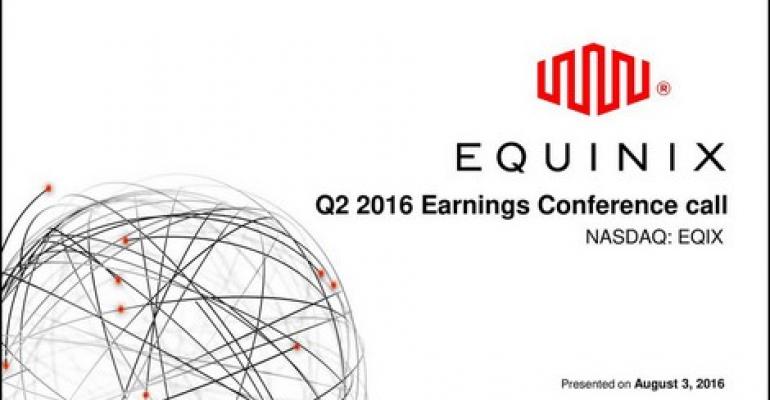 Equinix: Our Customers Are Pushing Out Our Global Footprint

It’s good news, or at least it should be, for the global leader in the colocation space:  Equinix’ revenue for the last quarter is a little better than 3 percent greater than analysts’ expectations, and somewhat greater than its own guidance in the last quarter.  A good chunk of that gain, the company admitted during its quarterly analysts call Wednesday afternoon, was due to wrapping up its acquisitions of Telecity and Bit-isle.

But as Equinix executives explained to analysts, these acquisitions haven’t been mere opportunities that present themselves out of nowhere, like four-leaf clovers in an unplowed field.  Enterprise demand for cloud capacity in hybrid installations is continuing to grow, and as Equinix works to meet that demand, its executives sounded at times like they needed to stop for a moment and catch their breath.

“I think we saw a bit of a land grab going on last year, as the top (cloud service providers) really tried to quickly get into what they saw as the critical baseline set of markets for their services,” explained Equinix COO Charles Meyers.  “And I think that slowed down a little bit, but now we’re seeing behavior in terms of people adding incremental services, beginning to scale their revenue lines.  Obviously that’s evident in the results of the likes of (Amazon)p; AWS and Microsoft, and we think that’s (incenting) other CSPs to have an interest in expanding their platforms as well.”

Specifically, the Equinix C-suite believes that the need for capacity drove CSPs to acquire data center space in 2015, first in established markets, followed later by emerging markets. Now they have stakes in the ground, so for these CSPs, 2016 is about establishing a pace for growth.  How much do they want to scale their capacities up?

That percentage is being determined for them, it turns out, by the CSPs’ own customer bases.  They’re moving to service models that are more elastically scalable.  While they’re no longer compelled to acquire and provision more capacity than they think they need — which used to be the case, in the pre-cloud era — these end customers may be consuming more capacity than the CSPs thought they would be.

Smith went on to say that his company is clearly experiencing the phenomenon to which it’s most sensitive to, from a monetization standpoint: pipelining, and all the cross-connects that come with it.  This is where the cash register bells start clanging for Equinix.  Customers are moving off of all-public cloud deployments, and bringing assets back within their firewalls.  So as Equinix executives admit, customer demand for cross-connects from customers demanding multi-cloud is exceeding their expectations.

“They’re pushing beyond even the footprint that we have around the world, into emerging markets,” said the leader of the provider with the biggest footprint there is.  “So at some point, that will pull us into future, emerging markets.  That kind of demand is what does that — a big customer driver.  We watch that very closely, too.”

As CFO Keith Taylor explained, in terms of gross and net bookings, his company is delivering very much what was expected.  But the complexity of hybrid cloud deployments for customers creates a backlog, which results in Equinix not always being able to bill for those bookings when it expects to.

“As we think about complexity of the global hybrid cloud implementation,” he said, “they’re extending the book-to-bill interval.”  Some $4 million of delayed revenue is attributable to this trend, he said.

“We’re driving our bookings engine as we expect; and with momentum that we think will continue to come from the channel, that gives us perhaps a greater opportunity as we look forward.  All that said, you can see our utilization levels moving up. . . there’s eight new projects coming on line this year, and there’s 19 that are in the hopper.  It’s important for us to build out our expansion initiatives, so we can continue to sell at that same clip, with the same set of opportunities.”

For its fiscal second quarter, Equinix reported revenue of $900.5 million, a gain of better than 6 percent over the previous quarter, and a nice 35.3 percent gain over the year-ago second quarter.  Adjusted funds from operations (AFFO) rose by 38.4 percent over the prior quarter to $290.5 million, a 31.2 percent gain over the year-ago quarter.  Some $485 million of revenue was attributable to stabilized Equinix International Business Exchange (IBX) data centers, with $250 million from expansion IBXes, and $15 million from new IBXes.

The completion of Equinix’ acquisition of Telecity and Bit-isle, said CFO Taylor, removed much of what he called the “noise” from the previous earnings pattern, letting the company concentrate more this time on growth and profitability.  Equinix’ acquisition of the St. Denis, Paris-based data center from Digital Realty — from whom Equinix was leasing capacity — plus one other Paris facility was a $211 million transaction that did factor into Wednesday’s figures.

“There’s a great opportunity as a company as we acquire assets; we can operate them differently than the landlord,” Taylor remarked, with respect to the Paris acquisition.  “In this case, there’s an opportunity as we think about the revenue we can derive from the incremental customers inside those data centers.”  Specifically, there are operating costs that can be recorded on the balance sheet as depreciation.  “So we get the benefit attributed to revenue, but we remove the costs associated with how we treated those assets.”

It’s the type of rethinking that executives have to do about the business they run, as their customers rethink their business models around the information assets they own and operate.