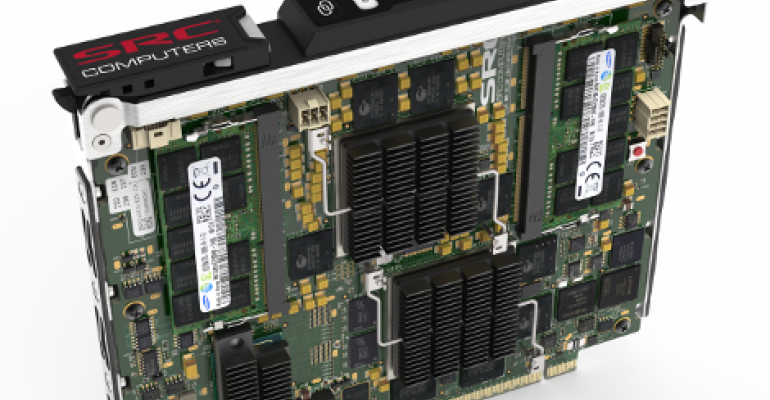 As Moore's law celebrates its 50th anniversary, SRC Computers is looking to deliver an orders-of-magnitude increase in server performance over x86 architectures with the introduction of its Saturn 1 server built using a radically different computing architecture.

An optional cartridge for HP's Moonshot chassis, Saturn 1 is a dynamically reconfigurable server SRC claims can deliver faster performance compared to traditional microprocessor designs. With 42 server cartridges per 4U chassis, it uses a User FPGA (Field Programmable Gate Array) and System FPGA to deliver a new way of overcoming computational limitations of current architectures. Instead of a microprocessor using a fraction of its resources, SRC says, the FPGA is able to use 100 percent with direct access to memory.

SRC was founded by Seymour Cray, the late engineer who was a fundamental figure in the development of supercomputers, and Intel board member D. James Guzy in 1996. The company has been quietly working on defense and intelligence solutions for government agencies.

"Existing microprocessor architectures cannot keep up with the demands of hyperscale and cloud computing," said Jon Huppenthal, SRC president and CEO. "Software developers use every trick in the book to squeeze performance out of hyperscale applications, but they cannot overcome the limitations of multi-purpose processor designs. The Saturn 1 Server changes the limits of traditional microprocessor architecture and lets programmers use the code they already have on a radically different architecture."

SRC is not the first vendor to design a reconfigurable server based on FPGAs. The arrays are used to configure chips to maximize server performance for specific workloads.

Intel has used FPGAs to tailor processors for Amazon and for Oracle, among others. Microsoft has designed servers for its cloud services that support FPGAs, and Juniper sells super-fast network switches that also use the technology.

As SRC puts it, the application becomes the processor. By allowing custom programming of the FPGA with languages that programmers already know and use, the Saturn 1 makes possible a software-defined processor. Each server contains an efficient Intel processor for general-purpose software and other tasks.

SRC claims that hyperscale web services companies have ported their applications to Saturn 1 servers in three days. With the reconfigurability of the server, companies could instruct it to behave one way during the day and switch at night to an entirely different configuration.

Besides the performance increase in using the new computing architecture, SRC notes that the Saturn 1 saves space and power with about 2kW per 4U chassis and 9 chassis per rack for about 20kW.

The Saturn 1 server will be available for $19,995 for HP Moonshot through resellers, including Parallel Computing Solutions.