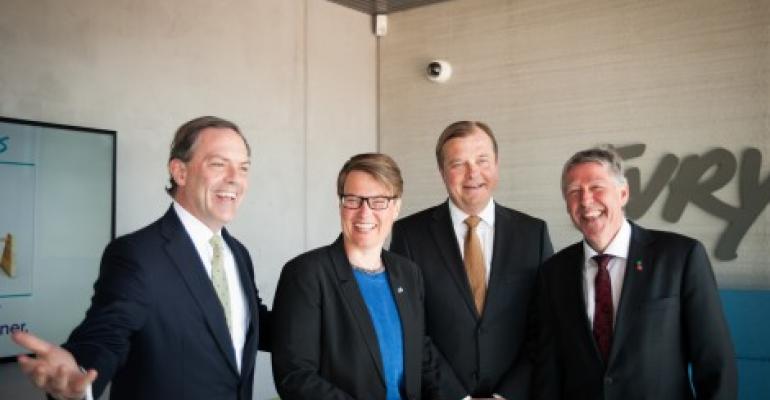 European data center service provider DigiPlex held a grand opening for its new data center in Norway powered 100 percent by renewable energy. The data center uniquely had its construction financed by the issue of publicly traded bonds rather than with equity or bank debt.

Featuring two three-story buildings, the site has 18 megawatts of power available, which is enough to power future additional data center space on available adjacent land. The facility’s anchor tenant is the large IT company EVRY ASA. EVRY is taking down 45,000 square feet and 11 megawatts in the facility.

The data center is located in Fetsund, a suburb of Oslo. One of its energy-efficiency features is an air-cooling system that uses naturally cool Nordic climate to reduce energy consumption by a quarter, according to the provider. The data center also features DigiPlex’s innovative De-Ox system that creates a low-oxygen atmosphere to lower risk of fire.

DigiPlex uses 100-percent-renewable energy across all of its data centers.

DigiPlex paid for construction for the data center by issuing floating-rate notes on the Oslo Stock Exchange (Oslo Børs) raising approximately $84 million. The company said this was the first time a European data center issued a publicly traded bond for any purpose. “It is an excellent model for future projects,” said Byrne Murphy, chairman of DigiPlex, in a press release.

John Harry Skoglund, mayor of the Fet Municipality was in attendance, as well as Minister for Climate and Environment Tine Sundtoft. Sundtoft praised the facility’s environmental performance, emphasizing Norway’s potential for data centers in general.

“Our electricity is almost 100-percent renewable,” said Sundtoft at the ceremony. “It is good for the climate to have such data centers located in the Nordics. We would like more of them, as they can become the foundation for a new industry.”

Besides abundant and relatively cheap renewable power and its cool climate, Norway is politically and economically stable. However, its Nordic neighbors Iceland, Sweden, and Finland have seen the majority of data center activity recently, all touting similar benefits of renewable energy and cool climate.

Google and Microsoft have built data centers in Finland, and a massive Facebook site is in Lulea, Sweden, other projects like Hydro66 following in tow. Iceland has Verne Global, and the country has been pushing aggressively for more data centers.

There has been growing interest in Nordic countries as data center destinations in recent years.