Autoscaling isn't new to the cloud world, but it is new to the masses on Google's Cloud Platform. The service is now in Beta, which is Google-speak for widely available.

Intelligent horizontal automatic scaling is now available to everyone on Google Cloud Platform. The company briefly touched on the autoscaling features during the last GCP event. Today the service is officially in beta. Google frequently keeps features in beta despite their being production ready.

Autoscaling allows customer applications to be more cost effective and resilient. By scaling up or down, a customer doesn’t pay for what they don’t use but still maintains the ability to expand infrastructure in support during spikes in usage. It looks at how far the current state is from the desired target and guesses intelligently in response. Save money during lulls, keep up during high usage.

The Compute Engine Autoscaler intelligently and dynamically scales the number of instances in response to load conditions through definitions of ideal utilization levels of a group of instances, Google software engineer Filip Balejko, wrote in a blog post. The service detects changes and adjusts the number of running instances to match. It can respond to CPU load, Queries Per Second on an HTTP Load Balancer and metrics defined through the Cloud Monitoring service.

At the recent Google Cloud Platform Live, Autoscale was demonstrated scaling up to 1 million queries per second. 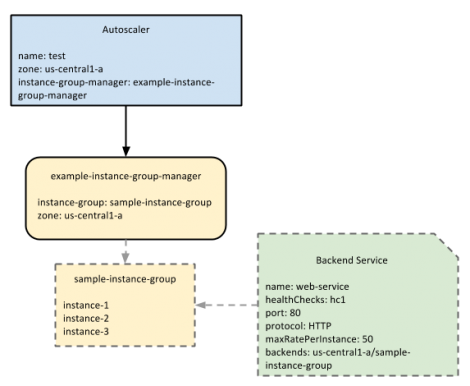 The Autoscaler watches the serving capacity of the managed instance group, which is defined in the backend service, and scales based on the target utilization. (Source: Example in GCP Documentation)

Customer Wix.com, a popular do-it-yourself website-building service, is one of the first users. “Reducing [our] expenses, while giving us confidence that Google will manage the appropriate number of machines, even when a spike occurs," said infrastructure team lead Golan Parashi.

Cloud providers continue to build out features and tools to help customers use cloud resources. Autoscaling isn’t new to the cloud world or to Google. The news is that it is now widely available on GCP.

Amazon Web Services also has autoscaling capabilities, which were first introduced in 2011. Autoscaling has been built into Microsoft's Azure since 2013.

Google is the newcomer in the trio to the cloud compute scene, its compute service entering general availability in late 2013. In addition to innovating, Google is also playing a game of catch-up when it comes to features like autoscaling.

It's Platform-as-a-Service offering, AppEngine, has been around much longer, initially released in 2008.

The recent Google event also saw the release of a hosted Kubernetes offering on the part of Google for Docker container management. Amazon Web Services responded at re:Invent with several services of its own, including native Docker support.

Microsoft hasn’t been quiet with Azure, also focusing on bringing in features and support for containers.