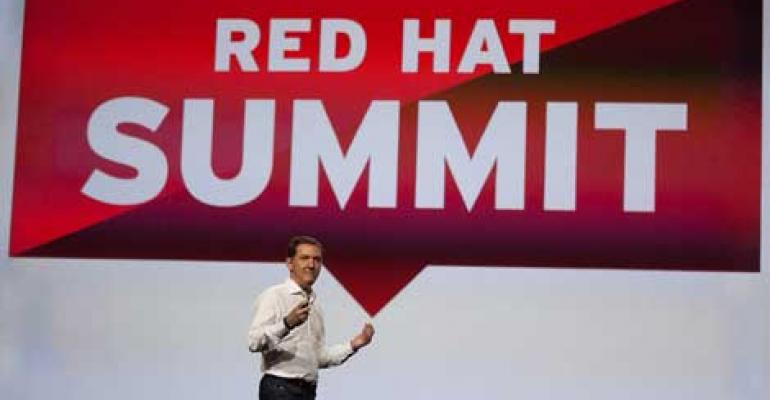 At its annual Red Hat Summit event in San Francisco this week Red Hat (RHT) put the focus on developers, with announcements of integrating cloud, hybrid and Internet of Things using JBoss Fuse 6.1 and JBoss A-MQ 6.1, delivering on the promise of modern middleware, and a success story with IBM in helping Casio implement a virtualized storage infrastructure.

Celebrating its 10th annual Red Hat Summit event in San Francisco this week Red Hat (RHT) put the focus on developers, with announcements of integrating cloud, hybrid and Internet of Things using JBoss Fuse 6.1 and JBoss A-MQ 6.1, delivering on the promise of modern middleware, and a success story with IBM in helping Casio implement a virtualized storage infrastructure. The event conversation can be followed on Twitter hashtag #rhsummit.

Offering a boost to its standards-based integration and messaging products Red Hat announced the availability of JBoss Fuse 6.1 and JBoss A-MQ 6.1 to  extend and simplify integration to all facets of the enterprise. The technologies ease the development and maintenance of integration solutions and provide a vast array of connectivity options.  JBoss Fuse 6.1 and JBoss A-MQ 6.1 feature full support of AMQP 1.0 (Advanced Message Queuing Protocol), a vast library of connectors, ability to manage integration processes and improved high availability.

As part of its vision to establish a unified platform that encompasses the development and management of end-to-end applications that span the web, process orchestration and integration, Red Hat released JBoss Fuse 6.1 on OpenShift as a developer preview. The preview allows users to explore the messaging and integration capabilities of Apache ActiveMQ and Apache Camel running in a Platform-as-a-Service (PaaS) environment. Users can run integration in the cloud, allowing for message queueing, transformation, and routing, which are many of the same capabilities provided by integration PaaS (iPaaS) offerings.

“Integration can be a daunting task for organizations with IT assets spread across on-premise, hybrid, or cloud-based environments,” said Mike Piech, general manager, Middleware, Red Hat. “Our goal is to simplify integration and provide consistent, reliable, and highly interoperable connections to all facets of the enterprise, and in doing so, unlock the value of existing assets and enable faster innovation.”

After promising Red Hat JBoss xPaaS services for OpenShift last fall, Red Hat is ready to deliver the abstractions and capabilities of traditional middleware in a more immediate, unified, and powerful—yet simple—paradigm enabled by the cloud. It demonstrates this with integration, business process management and mobile services through four xPaaS services: Application Container Services (aPaaS), Integration Services (iPaaS), Business Process Services (bpmPaaS) and Mobile Services (mPaaS) - based on the AeroGear project. Red Hat will now focus on hardening the integration and business process technologies for production use and then begin to bring the services together into a unified experience.

Within two years, Casio slashed its storage costs in half by integrating the internal storage disks of multiple servers and using it as one large storage pool that is accessible through the virtualized server. The Red Hat Storage management console also provides a simplified and unified way to manage both the storage and virtualized server environments for optimized performance.

“By deploying Red Hat Storage with Red Hat Virtualization running on IBM x series servers, we were finally able to build a storage environment at a low cost while using commodity servers," said Kazuyasu Yamazaki, group manager of the IT Infrastructure Group at Casio Information Service. "Our costs, including various procurement costs and operating fees, fell to less than half of what we had been spending before implementing Red Hat Storage. And, our IT usage was by no means optimal or efficient. We were locked in by vendors’ proprietary storage hardware technologies, so we couldn’t manipulate the system ourselves.”