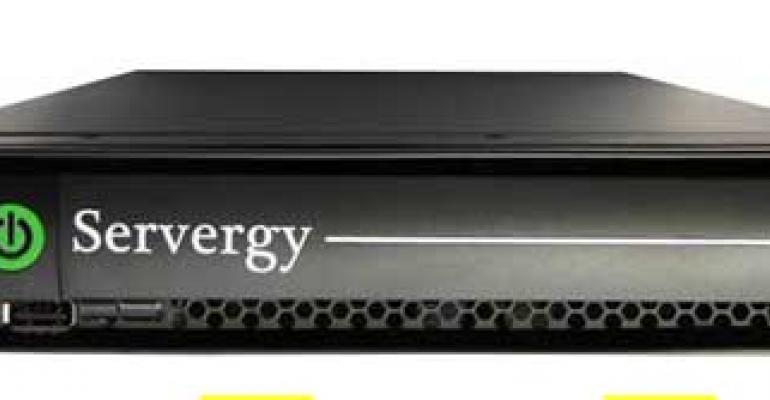 A new server company called Servergy has launched with a new line of Cleantech Servers built upon Power Archtecture from Freescale.

A new server from Servergy. Servergy's Patented Cleantech Architecture is built upon Power Architecture from Freescale in a smaller form factor than traditional servers. (Photo: Servergy)

Skyrocketing energy demands and costs are perhaps the biggest concern for data center operators globally. A new server company called Servergy is looking to fix that with a new server line called Cleantech Servers and a partnership with IBM. Servergy's patented Cleantech Architecture is built upon Power Architecture from Freescale.  Servergy is the only company besides IBM offering Linux-on-Power servers.

Servergy’s initial Cleantec Server product is the CTS-1000, a hyperefficient PowerLinux server offering high I/O. The new servers are based on Servergy’s patented architecture, and built in the USA. The company says Cleantech servers can dramatically reduce server power, cooling, space, weight, water and carbon footprints. It is now available for pre-order with delivery anticipated for the end of 2013.

The CTS-1000 has a unique footprint, which equates to less than one-fourth of 1U. However, it's designed to work with traditional racks.

"We're addressing the biggest problem in the data center, electricity costs," said Bill Mapp, the founder, chairman and CEO of Servergy. "It’s not a micro server for micro-jobs. We have a micro-server footprint, but this is very high density. Our workloads are suited for scale out and I/O acceleration for data intensive uses. We have several patents in place, and trade secrets embedded in the technology that allow us to achieve an 80 percent reduction across power, cooling, water, and carbon footprints."

The CTS-1000 delivers what the company says is industry leading performance-per-watt PowerLinux server with maximum power used under 130 watts at full load.When asked how Servergy accomplishes its energy savings, Mapp emphasizes that it's not any one thing.

"We took a true zero sum step function engineering approach and really engineered from the ground up," said Mapp. "We challenged the assumptions of the status quo. Within the building materials of a server, there’s thousands of parts. The real answer is not any one thing that we’ve done – it wasn’t one silver bullet. In going back to the drawing the board, and really engineering from the ground up, we had to do things disruptively different.

"Out of that systems engineering perspective, it's not just software, hardware - it’s a holistic approach," Mapp said. "It’s taken a four year process to get to this point, to build this technology. There’s stuff we’ve done in firmware. We've redesigned our own power supply. One other example is the SOC. It was never intended to be part of the server, but it has given us high I/O."

The chassis is redesigned from the ground up, in addition to using Power Architecture for high-energy efficiency as well as very high I/O and compute density. In the footprint of a legal pad, the server packs two 10GB and two 1GB ports, as well as eight brawny cores in a 1.5Ghz Power Architecture SOC processor with up to 2MB CPU cache, 32 GB of memory and 6 TB of storage. It has embedded accelerators, including an advanced encryption engine, networking offload engine and a pattern-matching engine that can be used for big data applications.

There is a huge demand for server efficiencies. Energy prices are on the rise in general, amidst the internet of things driving everything online. This is the era of big data, and servers are a logical point to gain efficiencies. In a report by Digital Realty Trust, the largest data center builder in the world, the number one reason that data centers look to expand their data center infrastructure is to try to improve energy efficiency.

“Data centers operators globally are searching for answers to their power, cooling and space limitations – all challenges that the CTS-1000 addresses head on,” Mapp said. “Servergy is not just in the business of selling servers. Our ultimate goal is to create and deliver clean and green data center solutions that leverage the power and potential of technology at its best to positively impact all the triple bottom line 3-Ps of People, Profits and Planet."