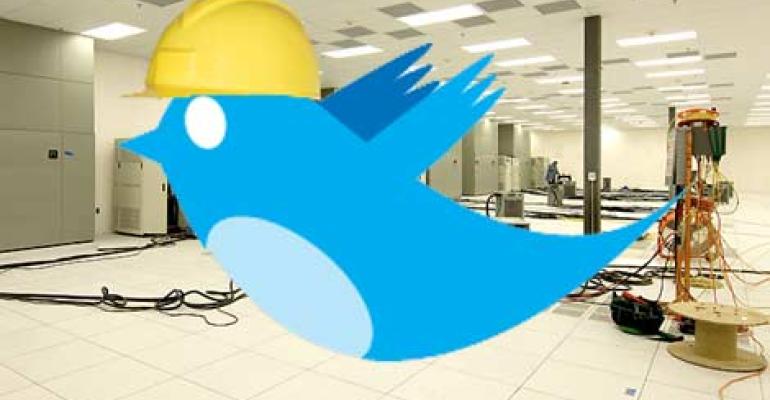 Twitter has begun a major expansion of its data center infrastructure, adding space on both coasts in anticipation of huge growth for the microblogging service. That includes a large long-term deal for data center space in Sacramento.

Twitter has begun a major expansion of its data center infrastructure, adding space on both coasts in anticipation of huge growth for the microblogging service.

Late last year, Twitter added about 100,000 square feet of space in a QTS (Quality Technology Services) facility in Atlanta, expanding a data center presence that it established in 2011.

Now industry sources say Twitter is leasing a huge chunk of additional space in Sacramento, where it will expand its presence at the RagingWire data center campus. We’ve heard that Twitter has locked down more than 20 megawatts of space for a long-term expansion of its infrastructure in Sacramento, a transaction that may rank among the largest wholesale deals in industry history.

The expansion builds upon Twitter’s existing presence in Sacramento, where it has hosted servers since 2010. The company will reportedly build out its space in incremental phases, allowing a long runway for future growth.

A RagingWire spokesman said the company does not discuss its tenants. Twitter spokesperson Carolyn Penner said the company doesn’t comment on its data center locations. However, Twitter may have more to say about its data center operations Tuesday, when Director of Global Data Center Services Anoop Mavath will discuss Twitter’s infrastructure in a keynote presentation at The Uptime Symposium.

Opting to Buy Rather Than Build

Twitter's expansion is the latest sign of traction for the wholesale model, in which companies lease data center space from a third party provider rather than building their own facility. Twitter has reached the scale where it could consider building its own data centers, a path pursued by Facebook, Apple and Google. Company-built facilities offer economies of scale and can be customized with efficient designs that offer savings on power bills, which has been a major focus for Facebook.

Instead, Twitter has leased "plug-n-play" data center suites from wholesale providers. In the wholesale data center model, a tenant leases a dedicated, fully-built data center space. This approach offers faster deployment of new capacity, and the ability to manage capital spends in regions where it's expensive to operate data centers.

Apple, Facebook and Microsoft were among the largest consumers of turn-key “wholesale” data center space in 2012, according to a recent report from Avison Young. The trend is notable because all three companies have also been building massive data center facilities.

Twitter's decision to operate from leased data center space has boosted the fortunes of QTS and RagingWire, two providers that have built large footprints in strategic markets:

The expansion provides Twitter with the ability to manage steady growth in its server and storage requirements. Twitter has more than 200 million active users creating more than 400 million tweets per day. The company must also accommodate huge news-related traffic spikes, such as during the 2012 U.S. presidential election, when the social media site experienced a surge of 874,560 Tweets per minute, with a one-second peak of 15,107 tweets per second.

Up until 2010, Twitter used managed hosting services from NTT America, housing its servers in NTT data centers in Silicon Valley and Ashburn, Virginia. In 2010, Twitter announced that it would shift to using colocation space, starting with a new facility in Salt Lake City. The company apparently continues to maintain colo space in Salt Lake City, but there are conflicting reports about its usage of its space at C7 Data Centers.

The new data center space is part of a broader effort by Twitter to prepare for future growth. This week the company leased office space in Sunnyvale to house additional staff, and is also reportedly seeking an East Coast presence in Cambridge, Massachusetts. Last year Twitter opened a new headquarters in San Francisco.