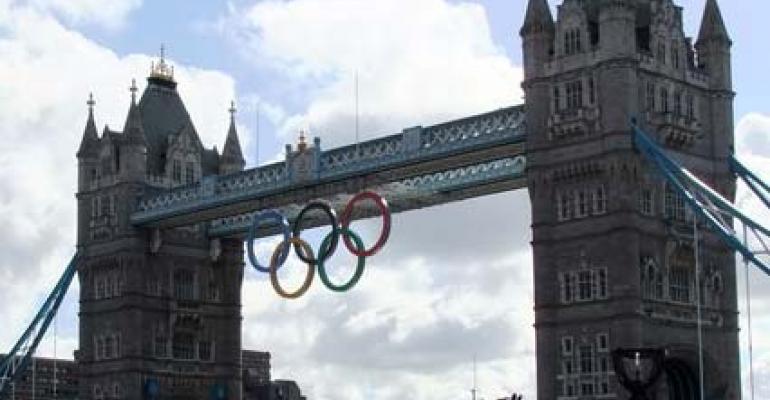 The 2012 Summer Olympics in London will be the most connected Games in history. As the athletes of the world gather to test their skills, tens of millions of sports fans will test the capacity of the city's telecom and data center infrastructure. Will the broadband, Internet and wireless systems be able to handle the demand? Here's an overview of key systems and their readiness for the Olympics, which commence with Friday's opening ceremonies. 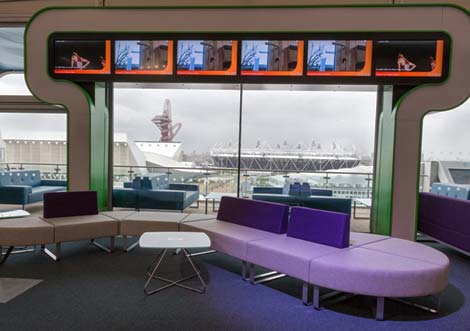 The view of the Olympic Stadium from Cisco House in London, an "executive experience" showcasing the company's technology. (Image: Cisco)

The 2012 Summer Olympics in London will be the most connected Games in history. As the athletes of the world gather to test their skills, tens of millions of sports fans will test the capacity of the city's telecom and data center infrastructure. Will the broadband, Internet and wireless systems be able to handle the demand? Here's an overview of key systems and their readiness for the Olympics, which commence with Friday's opening ceremonies.

BT has teamed with Cisco Systems to build the network for the London games, spanning everything from internet access to IP telephony to the "Games LAN," the network providing information for TV commentators and on-screen graphics. BT has also installed a fiber network for the 2,818 suites in the Olympic Village, making the athletes and coaches who stay there some of the first beneficiaries of the speedy broadband. BT engineers have laid 5,500 kilometres of cables - the distance from London to New York - to support the network, which will be transmitting 60 Gigabits per second, delivering the equivalent of Wikipedia every 0.5 seconds.

The Olympics network will span 30,000 connections across 94 locations. The infrastructure provided by Cisco Systems will include:

The Games’ communications network will be managed from the London 2012 Technology Operation Centre (TOC) in Canary Wharf, home of the city's major data center hubs. Over 90 BT people will work 12-hour shifts, with changeovers timed to avoid busy periods when events are taking place.

For more information, see dedicated web sites from BT and Cisco that provide details on their infrastructure for the Olympics. Cisco's David Deans has also written about the network in a series of blog posts (see part 1 and part 2).

Is the Olympic website (London2012.com) ready for an onslaught of traffic? Wired Enterprise reports that The London Olympics Organizing Committee turned to cloud testing specialist SOASTA to stress test the Olympic web site. SOASTA engineers spent six months working with the committee to simulate traffic not only to the Olympics website but across the many mobile apps that tie into it. The result, according to SOASTA CEO Tom Lounibos, is that the London Olympics website is probably better tested any Olympics site in the web’s short history. Lounibos says SOASTA has ensured that the site can handle traffic from as many as 1 billion people over the course of the games.

Others are not so sure. An analysis by Compuware found that London2012.com performed poorly in a number of key metrics. Michael Allen, Director of IT service management at Compuware, said that the Olympics site made more than 260 server requests to load some pages. "“As the traffic increases we expect that some of the architectural issues that we have identified will proliferate to what is a performance problem," Allen told ComputerWorld UK. "The number of requests, for example, is probably okay if you only have a few hundred users accessing it concurrently. "However, if you have thousands it’s going to put the servers under increased pressure."

The Olympics will be streamed like never before. Nearly 20 percent of UK residents say they expect to stream some of the coverage on their PCs, laptops or tablets. The BBC predicts that its live footage, streamed to computers across Britain, will generate in excess of a terabit (1 trillion bits) per second of traffic at peak times - the equivalent of 1,500 people downloading a feature-length DVD-quality movie every minute.

"It's clear that significantly more content from sport this summer will be consumed online than ever before, with online becoming a genuine alternative to sitting in front of the television," said Greg McCulloch, UK Managing Director at Interxion. "The key to delivering a great sports experience to a digital audience will be low-latency delivery of the real-time content."

London's data centers will play a key role in that effort. With the London transit system tested by the huge crowds, the data center team at Interxion has deployed “sleeping pods” at its London data center campus, allowing staff to sleep amongst the racks to ensure that the facility will be fully staffed throughout the Games, even if traffic and subway congestion makes it difficult for staff to travel to and from the site in a timely fashion.

The Telehouse West facility at the Docklands will almost certainly play a key role in delivering content from the Olympics, although the company has been cagy about it. Late last year Telehouse announced that Telehouse West would house the network for the “Host Broadcaster of a major sports event in London next year,” allowing international media organisations based within Telehouse to connect to the signal and transmit live radio and television coverage to viewers across the globe.

With close to a million visitors expected in London for the Games, mobile networks will be under extraordinary pressure, testing the quality of data services. Mobile operators have invested in additional base stations to provide network capacity to address the extra load at Olympic venues, such as the BT Wi-Fi network at the core Olympic Park site designed to handle 100,000 users. But outside of Olympic venues, the resources of existing network infrastructure may be stretched to breaking point leaving popular tourist and transport locations struggling to cope with the additional users.