Colocation market leader Equinix (EQIX) will be reporting its fourth quarter earnings on Wednesday, and investors and analysts will be closely scrutinizing its results.

Colocation and interconnection provider Equinix (EQIX) will be reporting its fourth quarter earnings on Wednesday (February 9). Investors will be watching the results for an update on the integration of the former Switch & Data operations, as well as the progress for the company's "Platform Equinix" strategy emphasizing ecosystems in key verticals.

The company's guidance forecasts revenues in the range of $341 million to $ 343 million for the fourth quarter, with adjusted EBITDA expected to be around $146 million. Equinix does not issue guidance for earnings per share. Assuming these numbers are met, organic growth for the company, excluding the Switch and Data acquisition, would still be in excess of 20 percent, compared to 2009.

Analysts expect, on average, revenues of $ 341.9 million, right in the middle of company’s guidance, and earning per share of $ 0.23. During the last conference call, Equinix's management issued guidance for 2011. The company expects revenues to be in excess of $1.5 billion, and adjusted EBITDA to be in excess of $675 million. Capital expenditures (CapEx) for 2011 are expected to be approximately $400 million, including both expansion and ongoing CapEx.

After the 3Q 2010 revenue warning, investors and analysts will be closely watching if Equinix will back the previous guidance for next year, and there's likely to be scrutiny of metrics like churn and occupancy in the former Switch and Data centers as analysts seek to understand if the integration challenges related to the SDXC acquisition are now behind the company.

As a reminder, several interesting non financial metrics are available on the Equinix investor section at this link. In particular, we turned our attention to cabinet equivalents billing and available at the close of the quarter as a way to monitor both the sales performance and the potential going forward for the company – see the chart at the end of the article, down-loadable at this link.

In the last few months Equinix has made an effort to differentiate its offering from the other colocation providers by presenting itself as a global platform providing customers the ability to quickly expand in most key Internet and financial hubs around the world. The Switch and Data acquisition was strategic to this vision, as it gave the company the opportunity to increase the number of networks connected to its data centers and gain a presence in additional North American markets, thus potentially reducing latency and boosting performance for its US customers. Today, Equinix can offer its clients the opportunity of hosting their servers with less than 10ms of geographic latency from 90% of the population of North America and Europe.

The financial sector comes immediately to mind when talking about low latency – however, there are several other applications and industries interested in insuring a great end user experience (click to enlarge pictures): 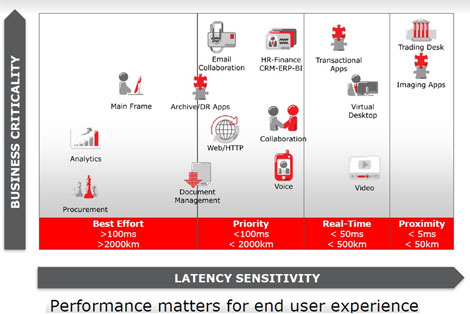 By positioning itself as the answer to the most demanding customers, Equinix believes it can also create “ecosystems” within its data centers that may reduce, in the future, the possibility of customers' churn.

Finally, here is a view of Equinix's data centers by size in North America. As the company does not release data on cabinet equivalents or power available for each market, we used the square footage to get a sense of the potential of each location. 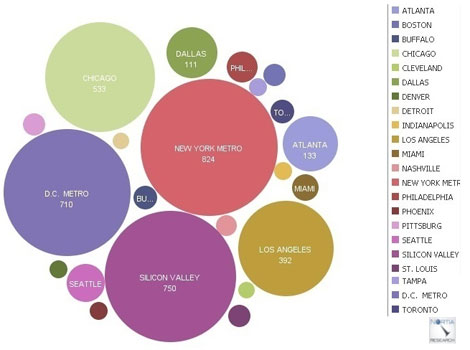 As you may notice, the New York metro area (where the company has a strong presence with the financial industry) is the largest market, followed by Silicon Valley and Washington, D.C. metro. The five largest market represent almost 85 percent of the company's potential space.