Microsoft is in discussion with Iowa officials about restarting a stalled data center project in the state, although envisions a considerably smaller budget, according to local media reports. 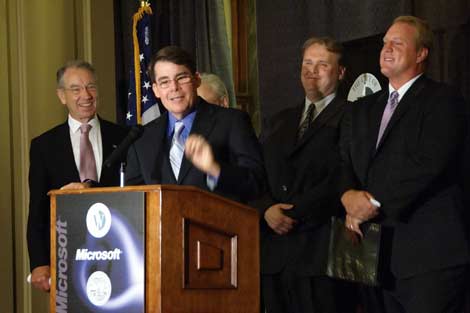 Microsoft is in discussion with Iowa officials about restarting a stalled data center project in the state, although envisions a considerably smaller budget, according to local media reports. The company is seeking to rework state and local incentives to support a $100 million project, reports the Des Moines Register.

That's far smaller than the $500 million data center project Microsoft announced in 2008. But in the ensuing 18 months, Microsoft has refined its data center design to a more lightweight approach that aims to slash its project costs by 50 percent.

Belt-Tightening Stalls Project
The West Des Moines project was announced in August 2008, but Microsoft never outlined a firm construction timetable, and rumors began to circulate that the project was on hold. In late 2008 Microsoft put the project on hold as it said it would reduce its investment in its data center expansion, citing the economic slowdown and the need to cut expenses.

Microsoft said the project is shrinking because “technology has evolved dramatically” since the project was postponed and a larger project “cannot be fully completed in the project completion time.”

Container-Driven Savings
The cost containment effort at Microsoft is driven by the company’s container-based data center design.  At Microsoft, the container – known as an IT-PAC, short for “pre-assembled compnent” – serves as the foundation of a broader shift to a modular, component-based design that offers cost-cutting opportunities at almost every facet of the project.

The next-generation design allows Microsoft to forego the concrete bunker exterior seen in many data centers in favor of a steel and aluminum structure built around a central power spine. The data centers will likely have no side walls, although they will have roofs, which is a revision from earlier design concepts.

A 'Competitive Situation'
West Des Moines city manager Jeff Pomeranz told the Register that other sites are being considered. “We’re not it yet," he said. "It’s still a competitive situation.”

Microsoft has told state officials that it expects to complete the first phased of the data center by Sept. 30, 2012. “Once the initial phase has been completed, we will be able to grow quickly on the site as warranted by our server demand, but we cannot guarantee the time frame in which this growth will occur,” Microsoft told the state.

The revived Midwest project is the latest signal of revived data center expansion by Microsoft. The company recently began construction on a new data center on its campus in Quincy, Washington. Microsoft is also said to be scouting potential data center sites in Virginia and North Carolina.