Akamai (AKAM) said today that it has been improving the efficiency of its global network, which includes more than 61,000 servers in 70 countries. The company says it reduced its network's carbon footprint by 32 percent in 2009. 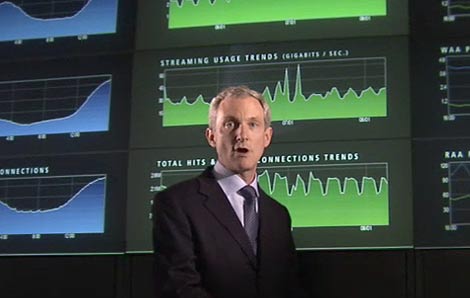 Akamai chief scientist and co-founder Tom Leighton in the network operations center, which tracks more than 61,000 servers in its global network.

Most companies are working on improving the energy efficiency of their data centers. But how green is your content delivery network?

If your CDN provider it's Akamai Technologies, it's getting greener all the time. Akamai said today that it has been improving the efficiency of its global network, which includes more than 61,000 servers in 70 countries, and hosted in more than 1,000 third-party data centers and ISPs.

Akamai said its 2009 energy efficiency efforts yielded a 32 percent reduction from its carbon output for 2008. The company said it has been upgrading servers with more efficient components, implementing virtualization, improving maintenance procedures to reduce idle time for equipment,  and decommissioning inefficient servers.

The company also highlighted a greening measure that's not discussed often enough: identifying and rewriting inefficient code to use less CPU and I/O, allowing a single server to support more traffic. When these efficiencies are spread across thousands of servers, Akamai said, it effectively increases the capacity of its network without adding more servers.

Akamai's update highlights a key question in the push to improve IT efficiency: How will carbon reduction efforts extend beyond the borders of your data center, and across the entire data center and network ecosystem? Akamai says it is designing an application for its customer portal to provide monthly data of their carbon footprint on the Akamai platform.

Will efficiency data and carbon reporting become a differentiator for CDNs? Akamai certainly hopes so, and is pressing thw folks hostinmg its gear to assist them in the effort.  Akamai said it will encourage its network providers and data centers to adopt efficiency measures.

Akamai Buys Wind Power for Its Texas Data Centers
May 11, 2017

Akamai Pledges to Source Renewable Energy for Data Centers
May 11, 2016