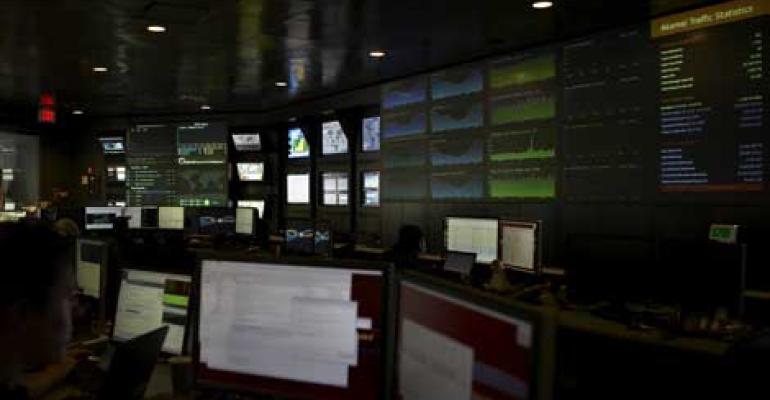 A look inside the network operating center for Akamai Technologies, which tracks web traffic at hundreds of locations around the globe. (Photo: Akamai)
Energy

One year ago, Akamai Technology pledged its commitment to source renewable energy for 50 percent of its global operations by 2020. The company just took a big step toward meeting that goal, announcing a 20-year investment in a wind farm.

Akamai said it should get enough energy from the 80-megawatt Seymour Hills Wind Farm to offset its aggregate Texas data center operations, representing approximately seven percent of its global power load. Based outside of Dallas and developed by Infinity Renewables, the project is slated to go online in 2018. Plans for the development call for construction of 38 wind turbines across approximately 8,000 acres.

Akamai is using a method called Contract for Differences to achieve the clean-energy goal for its more than 200,000 servers running in data centers spread across 126 countries—one of the world’s largest content delivery networks. The way it works is Akamai agrees to act as an “off-taker” for an X amount of energy from a renewable generation developer—in this case, Infinity Renewables—over a long term at a fixed energy price. The developer sells the energy on the wholesale market, and the difference between the actual sale price and the fixed price Akamai has agreed to goes to Akamai as either credit or debit. Akamai will continue to buy electricity from its utility provider but gets to keep and retire renewable energy credits it receives through its contract with the developer.

Tech giants like Google, Microsoft, and Amazon have led the way because their electricity use has grown as they open data centers worldwide to provide cloud computing services. But smaller companies are starting to make similar investments.

“Corporate buyers have become a very important market for the growth of utility-scale renewable energy deployment, having overtaken electric utilities in gigawatts purchased in 2015,” said Matt Langley, VP of finance and origination at Infinity Renewables, in a prepared statement. “We predict that minor energy off-takers, like Akamai, represent the next big wave of corporate buyers, and we are eager to partner with them.”

Akamai received a “B” grade in a recent Greenpeace report evaluating IT companies’ efforts to adopt and promote renewable energy. The company got high marks for transparency, commitment to renewable energy, energy efficiency, and advocacy, but got a lower grade for renewable energy procurement.