<img src="/sites/datacenterknowledge.com/files/wp-content/uploads/2010/02/intel-datacenter.jpg" width="470" height="306" /> Intel (INTC) has one of the largest data center management challenges on earth, with more than 100,000 servers housed in 97 data centers around the globe. The chipmaker has more than 18 petabytes of primary and secondary storage. 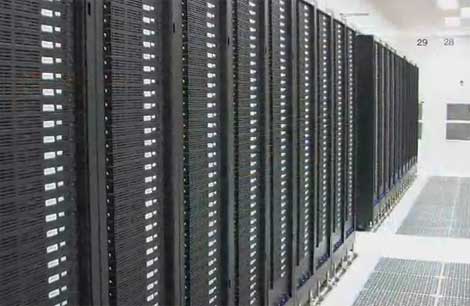 A look at the dense server configurations in one of the 97 data centers operated by Intel Corp, which runs more than 100,00 servers.

Chipmaker Intel has one of the largest data center management challenges on earth, with more than 100,000 servers housed in 97 data centers around the globe. About 70 percent of those servers support Intel staffers designing microprocessors, with the remainder dedicated to Intel's office, IT and web operations. The company manages more than 18 petabytes of primary and secondary storage.

Major Consolidation In Progress
Intel's infrastructure won't be this expansive for long. The company is several years into a massive data center consolidation that has already retired about 35 older facilities, and eventually hopes to compress its entire infrastructure into eight large, highly-efficient facilities.

When the consolidation is complete, Intel will have added about 300,000 square feet of new space in those eight sites, which will be strategically located in the US, Europe and Asia. The data center expansions will be built out using a modular structure, with each module designed to host 7,000 to 10,000 servers.

Efficiency Features in Newest Facility
The Intel web site presentation features a video walk-through of one of the company's new data centers in Israel, which is still under construction. The initial phase houses 220 racks, which are fitted with rack-top chimney systems to contain waste heat, which is then used to warm the office space in the building. The data center also employs a thermal storage system, which can reduce costs by allowing companies to run air conditioning systems at night, when power rates are cheaper.

Intel says its consolidation and modernization effort has already helped it save about $225 million thus far, putting the company about 35 percent complete on its goal towards ultimate savings of $650 million. In 2010 the company is accelerating its virtualization program, in hopes of raising the total of virtualization from about 20 percent of servers to 70 to 80 percent.