Virtual Goods and the Cost of Infrastructure

In an economy built atop virtual goods, how do you manage capacity and spending? Game hosting specialist GNi ofers a window into the evolving infrastructure requirements of virtual economies. 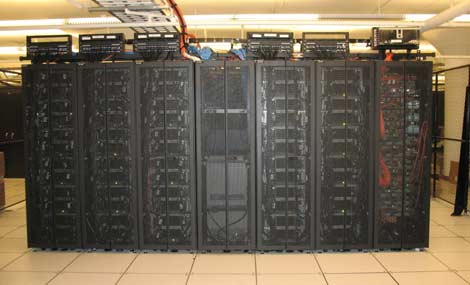 Some of the customer racks supporting online gaming operations inside a GNi data center.

In an economy built atop virtual goods, how do you manage capacity and sort out whether the business model is able to pay for the infrastructure required to power it? That's an important questionas as virtual item purchases become a key revenue stream for fast-growing social networking platforms like Facebook.

Managed hosting specialist GNi, which offers an Infrastructure as a Service (IaaS) hosting platform for online games, offers a window into the evolving infrastructure requirements of virtual economies. In the U.S., popular understanding of online gaming has been shaped by the popularity of World of Warcraft and other virtual worlds that generate through monthly subscription fees. That approach is increasingly yielding to a "free-to-play" business model.

"A lot of games are free, and now make their money by selling virtual items," said Robert Yusin, General Manager of Field Operations at GNi. "The most popular games that we see are the virtual item games."

Pioneered in Asia
This gaming business models based on virtual goods developed in Asia, where some industry watchers say virtual goods is a $7 billion market. One of GNI's large gaming customers is Frogster Interactive, whose free-to-play game Runes of Magic has more than 2 million users.

"We had to figure out a capacity planning strategy," said Yusin. "How do they monetize that huge user base and create a profitable model?"

The infrastructure piece of the equation is a crucial variable, since the creation of new virtual items is relatively inexpensive."The incremental cost of another gif is zero," as Live Gamer chief technology officer William Grosso said in a presentation at the Virtual Goods Summit last week.

Content Delivery a Key Cost
The delivery of that content is another matter. "Flexibility and the ability to virtually expand and contract is critical for gaming," said Yusin. "They have peaks and valleys (in their usage), especially when they add new capabilities."

"Next-generation gaming places greater demands on infrastructure, requiring persistent session continuity, the ability to scale flexibly and dynamically to serve changing audiences, and high reliability, all of which must be delivered within tight cost parameters," said Lydia Leong at Gartner.

A subscription model makes for easier math on the revenue side (x subscribers vs x subscription fee per month) and understanding how the infrastructure spend will affect profitability. Uptime becomes even more important in a transaction-based economy, in which revenue comes to a halt when players are offline.

Peaks and Valleys
"Frogster is really about how many items they are able to sell," Yusin explained. "They build precision models based on X number of users, and are able to really track peaks and valleys around new features and special promotions."

In September Frogster introduced a new feature, and the game’s bandwidth usage surged to a sustained 600 megabits of data per second, and stayed at that level for four days. That creates challenges for the game hosting provider, especially one like GNi that also has a growing business hosting applications for enterprise clients, including financial institutions.

"(Enterprise) requirements are around uptime, security, disaster recovery and application management,” Yusin said. "Those are not the concerns we hear from gaming customers. With the gamers, it’s how fast can I get this? How fast can we expand?"

Segmenting Data Center Operations
The divergent requirements of game companies and enterprise customers are factored into GNi’s data center planning. “We have to be able to create segmentation within our infrastructure,” Yusin explained. "If a game is launching, we will isolate its infrastructure from the rest of our customers, so it doesn’t impact our SLAs (security-level agreements). We also have flexibility in adjusting the burstability of our network."

GNi's IaaS gaming platform offers tools for developers and for gamers has been growing quickly, Yusin said, driven by interest from developers in Europe. The company operates data centers in California, Frankfurt and Singapore, and is seeking an additional data center presence on the east coast of U.S. GNi has a standard gaming "pod" of IBM blade servers that can be turned up quickly, but also offers colocation services to accommodate custom devices like security appliances for its enterprise customers.