The 3000 Skyline Dallas data center project in Mesquite, Texas is notable for its power infrastructure, with an on-site substation and initial capacity of 40 megawatts, with the ability to expand to 100 megawatts. 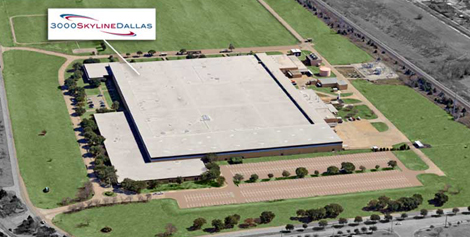 An aerial view of 3000 Skyline, the CAPSTAR/Cambay project in Mesquite, Texas.

Nine miles east of Dallas, a large former industrial property is being redeveloped as a data center campus. It's one of many properties around the U.S. that are being marketed for data center use, but haven't yet found tenants.

But the 3000 Skyline site in Mesquite, Texas is notable for its power infrastructure, with an on-site substation and initial capacity of 40 megawatts, with the ability to expand to 100 megawatts as tenants are added. In an industry obsessed with the cost and capacity of electricity power, developers CAPSTAR Commercial Real Estate Services and The Cambay Group are leading with the power story.

Yesterday the town of Mesquite said it had granted the developers 10-year, 50 percent abatements on both real property improvements and business personal property.  “Our commitment to 3000 Skyline is evident in the business inventive package and consistent with the city’s immediate goal of generating business now,” said Tom Palmer, Mesquite’s economic development manager.

Word of the 3000 Skyline Dallas property emerged late last year from public meetings where the developers described their plans to convert the former AT&T/Lucent facility into a data center. The first phase of the 700,000 square foot facility is scheduled for completion in the first quarter of 2010. Located in the City of Mesquite, Texas, nine miles from the Dallas central business district, the facility boasts its own on-site substation that will feature 100 megawatts of power provided by Oncor Electric Delivery Company.

"At the stage of development that we're in, every detail is important," said Bret Bunnett, CAPSTAR president. "But the most crucial element is the electric power provider, and we are very pleased with the cooperation and leadership we are experiencing with Oncor. They have been reassuring and thoroughly professional. We know that they'll deliver what we require and more."

The facility can be divided into four quadrants, which each have access to 20 megawatts of power and are equipped with separate internal entrance for individual user security. Scalable data center spaces are divisible from 45,000 square feet to 770,000 square feet.

The architectural firm of RTKL has designed the facility, and the firm of Thornton Tomasetti is providing structural engineering consulting.