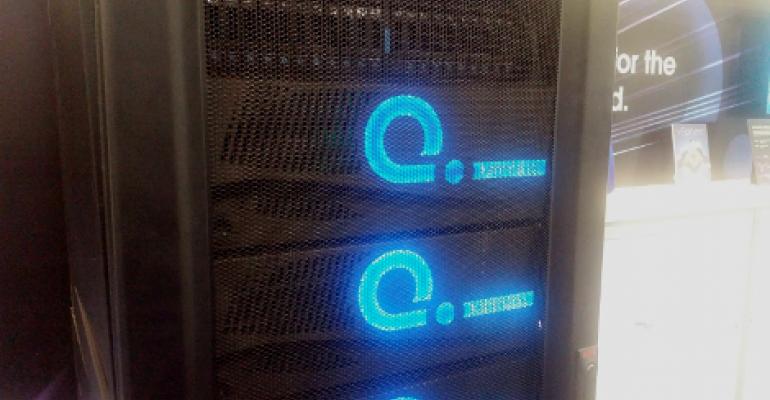 A Kaminario flash storage rack on display at a conference in December 2016 (Photo: Yevgeniy Sverdlik)
Design>Storage

Closes $75 million round, plans to expand in Asia and Europe

(Bloomberg) -- Kaminario Inc., a flash-storage company that develops its products in Israel, closed a fundraising round of $75 million -- nearly double the expected amount -- and will use the money to expand in Asia and Europe and boost technology development to gain market share.

The Needham, Massachusetts-based company competes with multinational giants such as Dell Technologies Inc. and Hewlett Packard Enterprise Co., and counts Priceline Group Inc., Kenneth Cole Productions Inc. and Telefonica SA among its customers. Kaminario says its technology, which delivers storage solutions for online retail, gaming and finance companies, is luring customers away from the larger companies.

“We are growing exponentially, doubling the company’s top line in the past four years,” founder and Chief Executive Officer Dani Golan said in a telephone interview. He attributed the company’s success to building flash storage “from the ground up,” instead of adding it to legacy products as competitors did.

“It’s really about the ability to access data faster and more consistently,” he said.

Global market intelligence firm International Data Corp. expects global sales of flash storage, which uses the type of fast computer memory that’s found in smartphones, to rise to $7.7 billion in 2020 from $4.2 billion last year and make up 70 percent of the enterprise storage market. Beyond the industry giants, other flash storage companies include Pure Storage Inc. and Nimble Storage Inc. A third, SolidFire Inc., was acquired by NetApp for $870 million last year.

Kaminario, which has raised a total of $218 million from Waterwood Group, Sequoia Capital, Lazarus Management Co. and Silicon Valley Bank, among others, would like to stay private “as long as we can,” Golan said. “We aren’t in a hurry to go public, but this is certainly the direction.”

In an August report, IDC said Kaminario, which currently gets most of its sales from North America, was well-positioned to gain market share in Europe due its commitment to low-cost systems and innovation.

“The storage market has always been very aggressive, with very entrenched players,” said Stu Miniman, senior analyst at Wikibon, an open-source research community. But for companies like Priceline, Kaminario is “well positioned and has a good story” because its product is easy to scale as website traffic grows.

Some of the money raised in the latest round will go to integrating emerging hardware technologies. The company is also collaborating with hardware companies like Intel Corp. and Samsung Electronics Co. to ensure when new products hit the market, “we can adapt very fast,” Golan said. The funds also will go toward boosting sales in Asia, particularly China.

“The market is very early, and no one is clearly king of the hill yet,” said Steve Duplessie, senior analyst at Enterprise Strategy Group Inc. Kaminario must convince buyers to choose them over more established players, he said, but added that they’re succeeding at that so far.

“If they can take advantage of their technical advantages before the other guys catch up, they absolutely could be the next big thing,” Duplessie said.