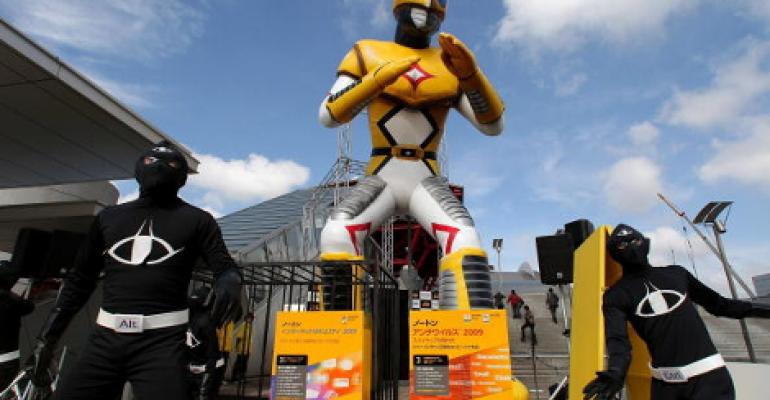 The figure of Norton Fighter, a hero character symbolizing reliability of Symantec&#8217;s Norton Products, is displayed at Makuhari Messe in 2008 in Chiba, Japan. (Photo by Koichi Kamoshida/Getty Images)
Business>Deals

After a year of preparation Symantec has announced that it will be spinning Veritas out as an independent private company as part of a deal valued at $8 billion.

Soon to be owned by The Carlyle Croup, a private equity firm, Veritas will be led by Silicon Valley veterans Bill Coleman as CEO and Bill Krause as chairman. Coleman was one of the original founders of BEA Systems, while Krause is a former CEO of 3Com.

John Gannon, Symantec executive VP and Veritas general manager, said that as a private company Veritas will not only be able to implement its future product strategy more aggressively, it’s more than likely that it will be looking to acquire companies that complement its core information management business.

“We’ll be out of the spotlight of Wall Street that brings a lot of scrutiny every quarter,” said Gannon. “That should enable us to be more nimble and perhaps even bolder.”

Previously, Veritas has outlined a product strategy centered around a modern information management platform that starts with its NetBackup software running on-premise and in the cloud and then extends to include analytics and a software-defined data management platform. Once clear of Symantec, Gannon said, Veritas expects to be able to more aggressively implement that product strategy.

From an operations perspective Veritas has until October 3 to set up its own ERP systems that operate independently of Symantec.

While Symantec has originally hoped to tightly couple security and information management, in reality, the individuals inside IT organizations responsible for acquiring those technologies oversee fundamentally different domains. After originally acquiring Veritas in 2005, Symantec let it be known last year that it was seeking to spin the unit out as an independent entity.

Of course, competition in the information services space is nothing if not fierce. Starting with backup and recovery, there are more competitors in this space than ever. Meanwhile, a race to develop the next generation of information management systems based on metadata repositories that can span everything from small to Big Data is already on.

On the plus side, Gannon noted that as an independent entity Veritas will be led by an experienced executive management team made up of Veritas veterans and industry luminaries that have continued to remain active in making venture capital investments all across the information management sector.