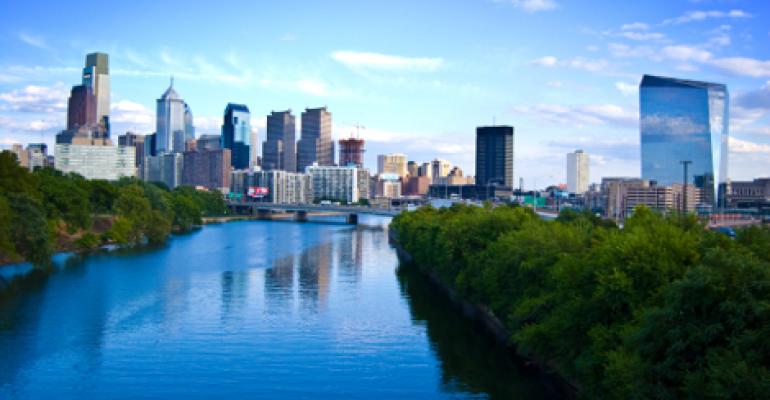 The vXchnge data center in Philadelphia is a homecoming for the team that used to lead Switch &#038; Data, whose first facility was also in Philly. (Photo: Philadelphia Skyline 2008 by Ed Yakovich. Source: Wikimedia Commons)
Colocation

Philadelphia build is a homecoming for Switch &amp; Data team whose first data center was also built in town.

Continuing its rise from the ashes of Switch & Data, vXchnge broke ground on a Philadelphia data center earlier this month.

The facility is an example of the company's strategy to build what it dubs “Built for Performance” data centers in 15 strategic, geographically-dispersed markets across the county. The company, started by alums of Switch & Data, the data center provider Equinix gobbled up for about $690 million in 2009, targets underserved, well-connected regions to enable edge computing.

Its target customers are network-centric businesses that need to expand geographic reach. "We’re not a managed services company' we want to enable managed services,” Keith Olsen, CEO of vXchnge and former CEO of Switch & Data, said.

vXchnge is building a 70,000 square foot Philadelphia data center for high-density infrastructure with multiple network and service providers. The facility is located at 1500 Spring Garden Street, and the company expects to bring it online by mid-2015.

vXchnge is managed by Switch & Data’s former management team, and its strategy employs a lot of Switch & Data DNA. The older company also tended to go after underserved markets.

“Data center deployments need to be in the right geography,” Olsen said. “Philly is a tremendous marketplace. Philly is high in demand, and the supply is tight.”

Philadelphia is the third-densest city in the U.S. and has high demand for data center services. vXchnge is positioning its facility there as one that doesn't have the physical and technological limitations of many existing legacy data centers and the buildings where they are housed.

The facility also represents a sort of homecoming, as it was the location of the first Switch & Data facility. “We had a history there,” said Olsen. “When you think about business metrics, average revenue per square foot, interconnection per CPU, Philly was always at the top of the list. We know what was happening to our sites when it came to demand and power and cooling.”

The team relied on more than its past experience in the market. It also performed an analysis of the top 50 markets in the U.S., and Philadelphia offered substantial opportunity.

The analysis included population growth, business presence and network capacity. “I’m a telegeographer,” said Olsen. “This analysis is the macro research; then there’s the micro research. We’ve established excellent customer relations over the decade. We ask customers about what areas they’re looking at as well.”

vXchnge doesn’t consider Philadelphia to be a secondary market, but rather a very underserved, well connected emerging market.

“We’re not doing this as a backup site; our strategy is the edge,” said Olsen. “How do you enable applications so you’ve effectively supported our exchange points? Our lives, personal and professional have become more network-enabled everyday. Data center deployments need to be in the right geography. We enable an application from that point.”

The entire former Switch and Data leadership team spent 18 months speaking to customers in the market and evaluating what data center services people were looking at. “We’re maniacally focused on the exchange point," Olsen said.

Today, vXchnge operates in four other U.S. markets on east and west coasts.