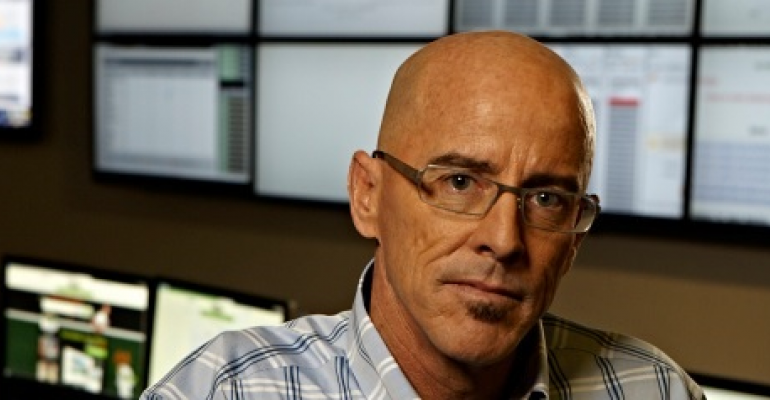 Once known for its commercials made to appeal more to NASCAR fans than to techies, GoDaddy has upped its seriousness leading up to a new Initial Public Offering.

Once known for its commercials made to appeal more to NASCAR fans than to techies, GoDaddy has upped its seriousness leading up to a new Initial Public Offering. It turns out that the tactics that helped it become one of the largest hosting companies in the world needed an update, and the past few years have seen GoDaddy reassess and reinvent itself to become IPO-ready.

GoDaddy had actually filed for an IPO back in 2006 aimed at raising more than $100 million, however, the filing was withdrawn, which was at least partly due to it being a bad time for tech companies to launch IPOs. Instead of going public, the company sought private equity, agreeing to let KKR, Silver Lake Partners, and Technology Crossover Ventures buy a 65-percent stake in the company in 2011.

2011 was also the year GoDaddy’s founder Bob Parsons, who made a media stir when he circulated a video of him shooting an elephant in Zimbabwe, stepped down as CEO, and becoming Executive Chairman. As Blake Irving stepped in as the new CEO in January 2013, Parsons further diminished his role at the company by stepping down as Executive Chairman in early 2014, while remaining on the board.

Last week, GoDaddy filed for another IPO with the Securities and Exchange Commission, aiming to raise $100 million.

But GoDaddy has changed a lot since its first IPO filing. The IPO filing shows that it has around 12 million customers worldwide, but, while its revenue has been steadily increasing to more than $1 billion, it has been losing money since 2010.

The company also has a growing revenue base, and the average revenue per customer has grown from $94 in 2009 to $104 in 2013, which is significant given the number of customers. 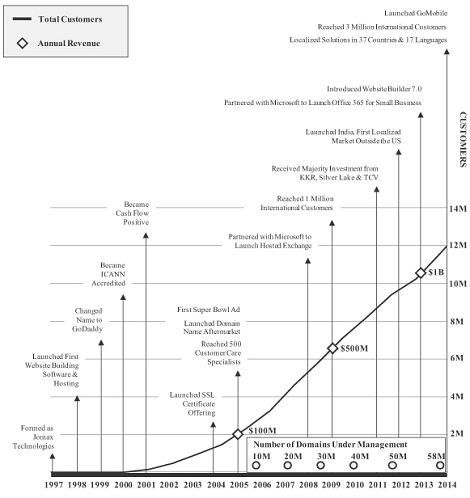 The Importance of Image

According to the IPO filing, the company attributes a lot of its brand visibility to its provocative and controversial ads, celebrity endorsements, and Super Bowl commercials, but that the company is repositioning itself to appeal to new markets.

As Slate’s Seth Stevenson wrote regarding GoDaddy’s Super Bowl ads: “I am loath to admit it, but I think their long-game strategy has paid off. Their early, crass, attention-seeking efforts won them brand recognition as a domain name purveyor, and they’re now pivoting their image to something more broadly palatable.”

GoDaddy states in the IPO, “During 2013, we began re-orienting our brand position to focus more specifically on how we help individuals start, grow and run their own ventures.”

One of its latest Super Bowl ads, for instance, featured a 36-year-old woman being able to quit her job as a machine engineer to pursue her puppet-making business full-time because of her website – hosted by GoDaddy.

The company is also investing substantial resources to increase our brand awareness, both generally and in specific geographies (including Latin America, Europe and India) and to specific customer groups, such as web professionals. Yet the company notes that successfully repositioning the brand might not necessarily mean total customer or revenue growth, or even greater brand recognition.

But there have also been some significant changes beneath the surface to revamp GoDaddy’s services.

One seemingly basic improvement was that GoDaddy recently gave customers access to cPanel administration tools for their web hosting accounts. cPanel allows them to do things like manage MySQL databases, add domain names, do one-click application installs, migrate cPanel sites and schedule Cron jobs. This might not be something that appeals to the average customer, but it puts GoDaddy’s services closer inline with what’s common in the hosting industry.

While many see the company as a provider of domains and web hosting, GoDaddy wants customers to grow their business and running their operations with productivity tools such as invoicing, bookkeeping and payment solutions, as well as marketing products.

Moving Beyond its Core Audience

GoDaddy had been originally positioned as an approachable company that eschewed the techy lingo and concepts that would have intimidated many people in the early days of the Internet.

Yet to move forward, GoDaddy needs to seek out a more tech-savvy clientele of web designers, developers and startups. One of its steps towards this is its acquisition of Media Temple, also known as “(mt)”, in October 2013. While it was stated that (mt) will continue operating as an independent and autonomous company, (mt) lends credibility to the GoDaddy brand.

Increasingly, we’re seeing a company that no longer wants to be known for its its outrageous former CEO and raunchy Super Bowl ads. Last year, it hired Elissa Murphy as CTO and sponsored the Close The Gap App, an online tool designed to provide personal strategies for closing the leadership and pay gap.

Clearly, the formerly unapologetic company is attempting to right the wrongs of its past. And while its former image and capabilities may have suited its legacy customers, GoDaddy is becoming a more innovative company whose culture and technologies are changing with the times.

As GoDaddy prepares to enter the stock market, it will be interesting to see if shedding its edgy image for a more refined one will ultimately make it more successful – or whether it will be seen as just another web hosting company.

This article originally appeared at: http://www.thewhir.com/web-hosting-news/ipo-road-godaddys-years-making-preparation-wall-street