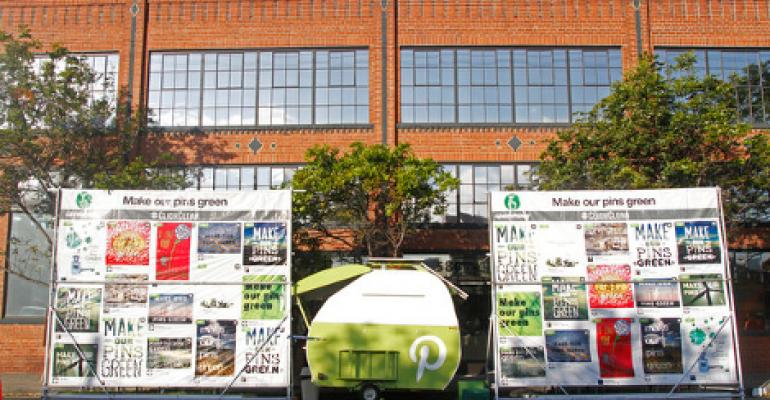 The environmental group's real target is not Pinterest, but the social network’s cloud provider Amazon and its coal-powered data centers.

Greenpeace continued its unapologetic pursuit of the internet’s top brands, pressuring them to do something about coal power which fuels most of the internet and all other industries, with an action outside of the San Francisco, Calif., office of Pinterest Tuesday.

The activists set up large Pinterest-style “pin boards” and eight “pins” designed by some of the social network’s top users on the street in San Francisco’s SoMa neighborhood. The artists that designed the pins have about 5 million Pinterest followers combined, according to Greenpeace.

Like many other major internet properties, Pinterest uses public cloud infrastructure by Amazon Web Services. By Greenpeace’s standards, the cloud provider does not do nearly enough to reduce reliance on coal power by its global data center infrastructure.

“AWS has dropped further and further behind its competitors in building an internet that runs on renewable sources of energy, estimated at only 15 percent, and is the least transparent of any company we evaluated,” the activist organization said on its website.

Amazon’s response has been to impugn Greenpeace’s data about its energy use. The provider has consistently said the environmentalist organization’s calculations relied on false data, but has not released any information about its data center operations to support its claims.

Pinterest spokesman Barry Schnitt said the company agreed with Greenpeace's goal of a future powered by renewable energy. "While we can't build a data center near the arctic circle, like Facebook, or finance a wind farm like Google, we are thinking about what we can do and talking to Greenpeace and others as part of that effort," he wrote in an email.

Besides Pinterest, popular online properties that rely on Amazon for infrastructure include Netflix, Spotify, Vine, Yelp, AirBnB and Reddit.

The strategy behind Greenpeace’s campaign to clean up the internet’s power mix has been to put pressure on the biggest data center operators to leverage their buying power with utilities to push them to add more renewable sources to their power mix.

Some companies, such as Apple, Facebook and Google, have committed to pursuing 100-percent renewable energy for their operations, while others, including Amazon and Twitter, have not.

In addition to the pin boards and pins outside of Pinterest’s headquarters, Greenpeace activists set up a solar-powered café and served cupcakes iced with a “green Pinterest” logo to the company’s employees.