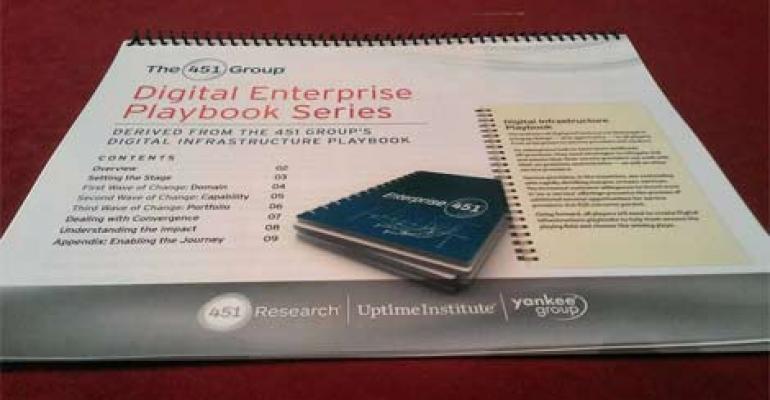 It's time for the industry to build its digital infrastructure playbook. At its Hosting &amp; Cloud Transformation Summit, 451 Research outlines its vision for where the industry is going. 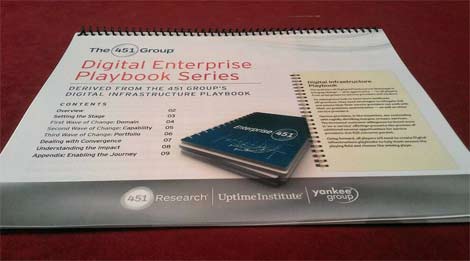 At the Hosting & Cloud Transformation Summit, 451 Research presented its vision for a playbook for service providers. (Image: 451 Research)

LAS VEGAS - What are the key ingredients in the "playbook" for success for hosting service providers? That was the key question at this week's Hosting and Cloud Transformation Summit, where 451 Research outlined its vision for a portfolio approach to drive data center transformation.

That playbook must sort out the right mix of infrastructure and services, find the balance between on-premises and hosted services, and how to position those offerings for IT buyers.

"Part of the challenge has been understanding what’s coming,” said Michelle Bailey, VP of Digital Infrastructure and data center initiatives. “We remain very bullish about the market. You’re going to start to see that cloud and hosting is going to be a bigger part of the IT portfolio going forward as we move into this next era.

"The expectations on all of us are going to climb," said Bailey. "IT buyers will have higher expectations, IT suppliers expect higher levels of service."

Bailey said the economy is getting better, but not quite there yet. The most important point is that the cost of capital remains low, which has recently allowed a number of data center companies to raise debt at what is an optimal time.

Where the Hosting World Is Headed

What are the key trends? 451 Research did a study this year in conjunction with Microsoft consisting 1,500 cloud hosting companies.

"What was really interesting to us, is that customers moving to a hoster are thinking of two things: cutting costs, and  how they’re going there to grow their business," said Bailey. "Once a customer has been there for a certain time, growing the business becomes more important."

"Despite an improving economy and the huge shift to digital business, IT spending has not rebounded. Cost-cutting took center stage in the wake of the economic meltdown in 2008, and some companies have not yet shifted their IT strategy to suit an environment of opportunity.

"There’s been IT executives that have built their careers on cost cutting projects," said Bailey. "Now the market has returned and the cost of capital is low. It is dangerous that we’re seeing cost-cutting projects dominate. If you’re investing in efficiency when cash is abundant, it means you’re opening up the door for competitors to grab the market."

"If we’re going to change the industry, we can’t be spending more on efficiency than we do on projects that drive new business."

The most successful hosters are the ones that help customers grow their business through supporting new applications, and enabling them to enter new geographies."Once they move to a hoster, they look at the hoster as the organization that will help them grow their business," said Bailey.

451 has also found that the portfolio of services that service providers offer has grown dramatically, and that customers are now prepared to pay separately for security services. "This is different," said Bailey. "Previously, this was thought of something that was built into the price. Security services are one of the biggest opportunities for service providers going forward."

Bailey also sees growth in sales of disaster recovery services. In fact, customers are now more interested in premium services. The average number of services customers are buying is nine – and the overall expectations are higher. But there’s no clear playbook yet. The theme this year is building that digital playbook.

SaaS applications are changing as well. "What’s coming is cloud native applications built specifically for cloud, built for scale," said Bailey. "With that everything changes. There will be definitive SLAs around these applications."

With the changing world, hosting provider downtime is a more significant impact to businesses today than it ever was. IT organizations need to figure out which part of their portfolio can live where, and it's up for service providers to help them along the way.

"Cloud was built on a lack of transparency, but the number one need from customers is trust and support," said Bailey. "The next selection criteria for cloud will be expansion capabilities."

The Role of Public Cloud

Is the market going all public cloud? Absolutely not, according to the survey. Out of companies already using hosted services, It will be roughly 55 percent on-premises and 45 percent off premises.

“We also know that hybrid cloud is going to be extremely important," Bailey continued. "Most customers are thinking in this manner, and this is why the investment in security is so important.”

What’s becoming a hurdle in private cloud is cost, according to the survey. In public cloud, security is the top hurdle. For hybrid cloud, the biggest challenge is integration - making it all look like one IT system in a single portal.

Customers now want more transparency from public clouds about outages and unauthorized access, so they can buy insurance and understand how cloud providers generally handle downtime. The providers that offer up this information will help buyers make risk assessments, and ultimately help customers adopt cloud. The big thing is the ability to provide insurance in the case of a disruption.

“Cloud is going to happen when customers are comfortable with it,” said Bailey.

Cloud computing's share of the hosted services market will increase from 6.9 percent to 24.6 percent in the next three years, 451 proejcts. The entire market is going to be $56 billion dollars. This will be more than what customers spend on hardware by 2014.

Matt Aslett, Research Director for data management and analytics, says the role of database hosting in the infrastructure space will grow. The DBaaS market revenue will grow from $150 million in 2012 to $1.8 billion in 2016.

“But it’s not all good news,” said Aslett. “Not all the database and hosting cloud providers are going to win. If you take Amazon out of this equation, the market is significantly smaller with fewer winners."

About 33 percent of respondents said they plan on using a relational database in the next year. They’re using it predominantly for development and testing, in order to figure out what makes sense to deploy. "It’s still about figuring out where they stand," said Aslett. “Don’t expect big data and Hadoop to create this industry for cloud hosting providers. There is a lot of interest but it’s very early stages."

Aslett urges us to think differently about big data. In the last few years, the conversation has been dictated by volume, velocity and variety. Now the conversation has moved on. "What I want to encourage you to do is define it by the realization of competitive advantage of storing, processing and analyzing big data that was previously ignored," said Aslett.

No Longer About Siloes, But Entire Business Use Cases

“What all of this means is that it’s a very different IT operations market,” said Bailey “The future CIO is going to be a portfolio manager. It’s not going to be about just IT efficiency projects anymore, IT it’s going to be the organization that drives new business. This is how big shifts in markets happen, by not watching what the competition is doing.

It’s no longer about siloes but entire business use cases. “The future CIO needs to decide what is going to be his or her job, and what’s someone else's problem,” said Bailey. “That someone else’s problem is where infrastructure providers have opportunity.”

What does it mean for suppliers in the market? It means you have to focus on metrics and helping customers grow their business. They’re really not looking for cutting costs anymore, but what to put where for strategic purposes.