The newest eBay data center project in Utah will run entirely on power generated by fuel cells from Bloom Energy, the company said this week. eBay will overhaul its power infrastructure to dramatically reduce its reliance on uninterruptible power supply (UPS) units and backup generators. 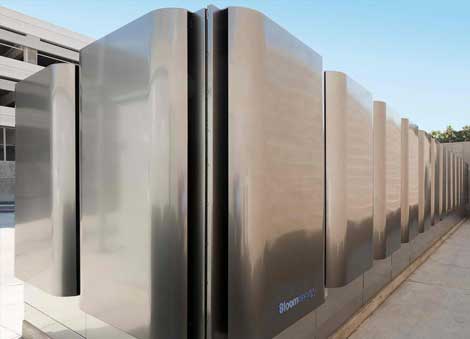 A bank of Bloom Energy Server fuel cells. eBay said this week that it will use "Bloom boxes" like these to power its new data center in South Jorden, Utah. (Photo: Bloom Energy)

The newest eBay data center project in Utah will run entirely on power generated by fuel cells from Bloom Energy, the company said this week. The use of the Bloom Energy Servers - also known as "Bloom boxes" - will give eBay a cleaner energy profile, allowing it to power its facility with biogas rather than coal-sourced power from local utilities.

Perhaps more importantly, eBay will overhaul its power infrastructure to dramatically reduce its reliance on uninterruptible power supply (UPS) units and backup generators. If the Bloom fuel cells providing primary power should experience problems, eBay will use the utility grid as its backup power source. In a traditional configuration, data centers use the utility grid for primary power, with UPS units and backup generators providing emergency power in the event of grid outages.

“It is really throwing out the way people have done it in the past,” eBay data center executive Dean Nelson told The New York Times, which first reported the news of eBay's decision. "You can build a better mousetrap.”

eBay will use 30 Bloom boxes in the second phase of its data center campus in South Jordan, Utah, which the company has dubbed Project Quicksilver. Bloom Energy Servers have a capacity of 200 kilowatts, meaning a 30-unit installation would support up to 6 megawatts of critical power. The new facility will be a “greenfield” construction project optimized for modular (containerized) data centers, and will build upon the designs being implemented in eBay’s first modular project in Phoenix, Arizona.

eBay says the new design will forego traditional data center backup systems, which will "increases the reliability of our power supply while also stabilizing our costs and reducing our environmental impact.," the company said.

This would be consistent with Bloom's vision for new designs that place the Bloom Energy Server in a featured role in data center power infrastructure.

In a March interview with Data Center Knowledge, Bloom's Peter Gross described power distribution schemes featuring dual-corded servers, with one input from the Bloom systems and the other from the grid. This approach would allow data center operators to reduce their reliance on diesel backup generators.

“The Bloom can reduce energy consumption and eliminate a significant number of high-cost components,” said Gross. “It’s highly unlikely that both power sources (the Bloom and the utility) would go away.”

Altering the Economics of Power Infrastructure?

Such a configuration could alter the historic economics of using fuel cells in data centers. One of the primary barriers to adoption has been the cost of the fuel cells. But if using Bloom boxes allows data centers to eliminate expenses for UPS units and generators, the cost equation looks very different.

The first phase of eBay's Utah facility supports production web sites for eBay.com and PayPal, the huge payment processing service owned by eBay. It's not clear whether the workloads will differ in the second phase of the project. In the Phoenix Project Mercury data center, eBay used a traditional raised-floor data center for some workloads and modular data centers for others.

The Bloom Energy Server is based on solid oxide fuel cell technology that converts fuel to electricity through an electro-chemical reaction, without any combustion. Because they are housed at the customer premises, the Bloom box can continue operating during grid outages. Bloom boxes can run on natural gas or a range of other biofuels, including methane gas from landfills. eBay will use biogas to support its Bloom fuel cells.

The eBay project is the second huge win for Bloom on a high-profile data center project. Apple recently confirmed that it will use 24 Bloom boxes to provide renewable power to support its facility in Maiden, North Carolina. Apple's Bloom boxes will provide only part of the power required to operates its data center, with utility power and solar arrays providing the balance.

Here's a look at illustrations from eBay depicting the changes in the Utah data design, showing the initial design with UPS and generators and the updated approach using just Bloom Energy Servers, which illustrate the impact on the infrastructure. 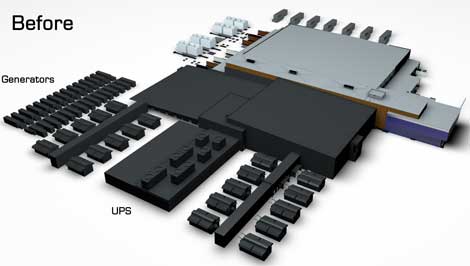 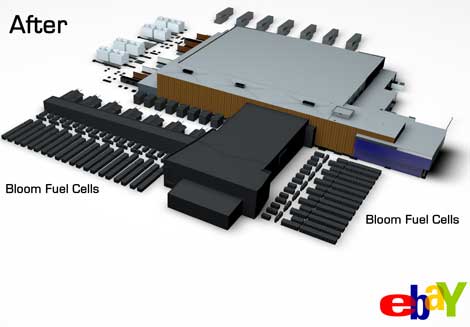