When you're building a hardened data center in the Midwest, you need to take tornadoes seriously. That was the case at Data Cave, which uses a 4.5 million pound roof as its first line of defense against windstorms. 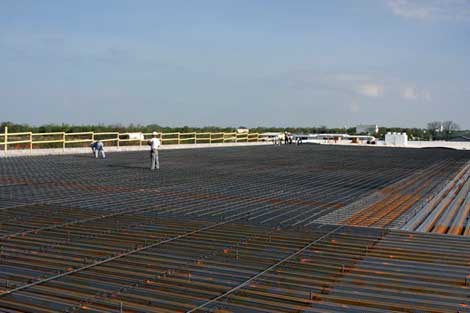 A view of nearly an acre of rebar atop the roof of the Data Cave facility in Indiana during construction.

When you're building a hardened data center in the Midwest, you need to take tornadoes seriously. That was the case at Data Cave, a colocation and disaster recovery facility that opened last year in Columbus, Indiana. For Data Cave, a key defense against tornado damage is the 43,000 square foot roof over the data center, which features eight inches of concrete reinforced with a framework of half-inch rebar, which in turn is covered with a rubber matting and a layer of gravel.

As a result, the Data Cave roof weighs 4.5 million pounds, according to Barry Czachura, who wrote about it this week on the Data Cave blog. "For those that might relate to numbers differently that is the equivalent of 1,258 average midsize cars (Chevrolet in this case), or 372 African elephants (with intact ivory) or 34 fully loaded Abrams battle tanks, all in a roof that is smaller than an acre!"

If that seems excessive, Data Cave says it's based on experience with Midwest tornadoes and the types of damage they can inflict upon structures. Czachura says the roof is a key line of defense.

"Twisters have a tendency to pull off or lift away a roof rather than push it in," writes Czachura, the Business Development Manager at Data Cave. "We decided to leave the whole Wizard of Oz thing to someone else. The end result is a roof with no edges for the wind to catch; no equipment on the roof to generate wind resistance, no penetrations through the roof for leak points (doesn’t matter if your roof stays when the wind ripped off your air conditioner and dumped water onto your equipment through the holes) and enough weight to stay put during an EF5 tornado."

It's working so far. Data Cave says it has 100 percent uptime in nearly two years of operation.