With its "data center operating system" software, i/o hopes to leverage its in-house research and development operation and distinguish its offerings in a changing market for IT infrastructure. 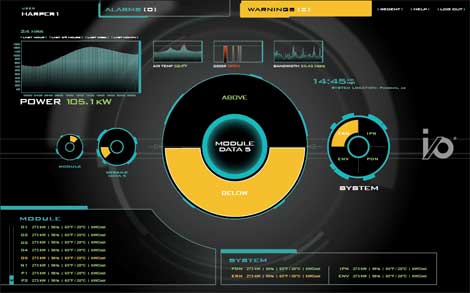 A screen capture of the i/o OS software for managing data center infrastructure.

As IT infrastructure becomes more complex, software is playing a growing role in the data center business. That's certainly true for i/o, which has developed its own software to manage and automate its  modular data centers.

The development of the i/o OS "data center operating system" software is part of the Phoenix-based company's broader bid to redefine the infrastructure and vocabulary of the data center business. i/o now describers itself as a digital energy company, reflecting a shift in which data centers are now leased in terms of megawatts of power capacity rather than square feet of space. In shifting its focus from traditional colocation facilities, i/o is now advancing modular deployment as "data center 2.0."

So why software? i/o sees it as a way to leverage its in-house research-and-development operation and distinguish its offerings in a changing market for IT infrastructure. "We're putting a lot of investment into this software," said Anthony D’Ambrosi, Chief Sales and Marketing Officer for i/o. The company has been expanding its development team as part of that effort.

The Data Center and the '"Single Pane of Glass"
i/o isn't the first or only data center service provider to develop its own software, as IBM and HP could certainly attest. It joins a growing number of competitors in the market for data center infrastructure management (DCIM) software.

The data center optimization field has become more crowded in recent years, as a flurry of new companies have introduced software to manage and automate elements of the data center. Equipment vendors have also stepped up efforts to offer software to centralize management of devices and conditions within the data center. The bid to create a "single pane of glass" - one DCIM tool to rule them all - is the holy grail for these companies.

i/o says its software opportunity ties into a larger paradigm shift in how companies deploy IT infrastructure. "We're making a bet on the entire business model being modular," said D'Ambrosi. "Think of it as a refresh of the data center strategy. What we're creating is an IT appliance and turning the data center into another part of the IT stack. We're going to empower the IT organization to take over the data center."

APIs, SDK and Integration
i/o OS is written in the C#, and provides application programming interfaces (APIs) to allow customers to tie into its capabilities. D'Ambrosi says i/o is developing an extensibility roadmap, including a software development kit (SDK) to allow clients and developers to build their own apps to plug into the system. i/o says its OS supports most apps and equipment, but the company is also offering an integration service for customers.

In addition to tracking and management capabilities, i/o is emphasizing its software's ability to provide continuous feedback to help identify potential problems and take preventative action.

i/o President Anthony Wanger says the software will be upgradeable, allowing for additional capabilities as the company's modules and hardware offerings evolve. He says i/o OS is part of the company's larger effort to "separate the improvements from the real estate."

"We've invested in research," said Wanger. "We think it's a sustainable advantage."