https://www.datacenterknowledge.com/sites/all/themes/penton_subtheme_datacenterknowledge/images/logos/footer.png
Recent
Recent
Top 5 Data Center Stories of the Week: March 27, 2020
Mar 27, 2020
Form Jacking: Why Your IT Shop Needs to Take It Seriously
Mar 27, 2020
Array Configuration Belongs on Disaster Recovery Planning Checklist
Mar 26, 2020
Google’s YouTube, Classroom Software Hit by Partial Outages
Mar 26, 2020
The Promise of Intelligent Cybersecurity Is Starting to Come True, Slowly
Mar 25, 2020
Featured
After Kubernetes’ Victory, Its Former Rivals Change Tack
Jan 27, 2020
Explaining Knative, the Project to Liberate Serverless from Cloud Giants
Jan 27, 2020
What Service Meshes Are, and Why Istio Leads the Pack
Oct 28, 2019
IT in 2020: A Look at the Year Ahead
Jan 10, 2020
Business

Continuing to break new ground with its data center tools, Microsoft said today that it had customized its management software to work with one of the company's other high-profile technologies - the Kinect gaming controller. 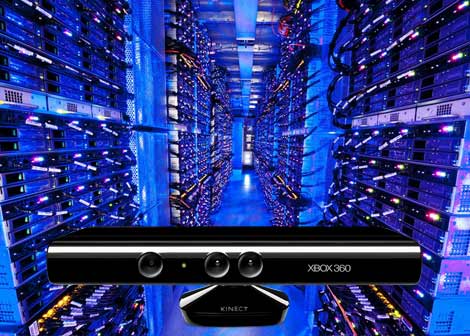 Microsoft says it will integrate its Kinect controller into its data center management tools.

Continuing to break new ground with its data center tools, Microsoft said today that it had customized its management software to work with one of the company's other high-profile technologies - the Kinect gaming controller.

The switch to a motion-controlled management system is an unusual step, but Microsoft says the change will simplify many of the  tasks associated with managing a data center, allowing the data center team to use gestures and voice commands to control servers and track power usage. As Microsoft seeks to streamline the management of its many facilities, the company says the design of the front-end interface is as critical as the back-end.

SCRY is the in-house software Microsoft uses to monitor its global data center network. It's an analytics tool that lets the company monitor its energy use, carbon footprint and power bill in each of the company's dozens of data centers and edge network hubs. Microsoft executives say the move is a logical extension of their mission to innovate in every aspect of data center operations.

“Everyone knows that Kinect for Xbox 360 is one of the hottest gaming platforms available today," said Kevin Timmons,the General Manager of Microsft Global Foundation Services. "Now we’re building upon Kinect’s 'You are the Controller' capabilities by using it to remotely perform everyday maintenance tasks in our Microsoft data centers. Our operations team based here in Redmond can now seamlessly and securely manage our worldwide data center assets using hand gestures and voice commands."

The Kinect uses a set of cameras to detect depth and color, processing the information to track players and their movements. The system is the fastest-selling consumer electronics device in history, selling more than 10 million units as of March 9.

By applying innovation to the routine tasks of facility management, Microsoft said it believes it can make data center management more attractive to a new generation of workers who embrace active gaming, and enable new forms of multi-tasking among the existing data center team.

"We have some engineers who have become so proficient that they can simultaneously perform memory upgrades while they’re hitting a high score on Dance Central,” said Timmons.

We'd like to wish all the readers of Data Center Knowledge a happy April Fool's Day. Our thanks to Kevin Timmons and the data center team at Microsoft for having such  a great sense of humor.