The huge New Jersey data center project unveiled by i/o Data Centers is a major step towards the company's vision for the future of the data center industry. The 830,000 square foot facility, housed in a former New York Times printing plant, reflects i/o Data Centers belief in the need for massive scale and a modular approach to data center deployment.

A deployment of i/o Anywhere data center modules at Phase II of the company's Phoenix facility (click for larger image).

For i/o Data Centers, the huge New Jersey project unveiled Thursday is a major step towards the company's vision for the future of the data center industry. The 830,000 square foot facility, housed in a former New York Times printing plant, reflects i/o Data Centers belief in the need for massive scale and a modular approach to data center design and deployment.

"The industrial phase of the data center has started," said Anthony Wanger, President of i/o Data Centers. "Companies no longer have to deal with real estate or construction costs and delays. i/o is mass producing the highest quality data centers that can be brought operational in less than 60 days"

The New Jersey project will likely settle the question of whether or not enterprise companies will embrace the modular data center concept. As many in the data center industry continue to debate whether modularity will go mainstream, i/o Data Centers is making a huge bet that its customers will be won over by the benefits of factory-built data center modules. The company recently launched production at a  Phoenix factory that will mass-produce the its i/o Anywhere data center modules, which can then be rapidly deployed at a customer premises or i/o facilities in Phoenix or New Jersey.

Multi-Tenant Take on Modular Design
The Edison site will be the world's largest modular data center, exceeding the scale of container-based data centers built by Microsoft and Google. But there's a big difference between dedicated server farms for cloud builders and multi-tenant "container colo" facilities for the enterprise market. If i/o is going where no colo provider has gone before, Wanger says, it's because that's where the market is headed.

"Our customers really led us to New Jersey, which is why we already have DCaaS (Data Center as a Service) capacity purchased at the location," he said. " i/o New Jersey will have immediate impact."

Will the i/o Data Center facility be disruptive for the data center business in New Jersey, a market with considerable diversity in both data center offerings and customer profiles? It's difficult to say. Activity in Northern New Jersey is driven by demand from Wall Street firms, which typically seek either colo space for high-speed trading or single-tenant data centers. There's also a growing cluster of facilities offering wholesale data center space in Somerset and Middlesex counties in central New Jersey.

But there are no dedicated modular offerings, and Edison is located between the north Jersey colo and managed hosting centers operated by Equinix, Savvis and Telx  and the REITs (such as Digital Realty Trust, DuPont Fabros Technology) offering wholesale space in central Jersey. In addition, i/o says it is increasingly targeting the 80 percent of data center users who operate their own facilities.

Data Centers on Wheels
A key component of i/o New Jersey's operation resides 2,000 miles to the west, in the module assembly facility inside a 220.000 square foot factory in Phoenix. i/o Data Centers says the factory will be able to churn out 18 megawatts of modular data center capacity each month as needed. The modular units will travel cross country by truck and rail, with the option of using ships or air transport if required.

The first phase of  the Edison project will have 20 megawatts of data center capacity, and the site is adjacent to a utility substation that can support up to 100 megawatts of power. Wanger says i/o New Jersey will be able to support up to 35,000 cabinets at full build-out, but said that number is a metric rooted in an earlier model.

"Let’s rethink this in terms of another industry," said Wanger. "Would anyone ask Cisco how many routers they’ve produced? Or Mercedes how many s500 series they have on the production line? The focus is more on the design, engineering and delivery – and that’s what we do for the enterprise-grade data center. All the previous notions of building a data center no longer apply. We have as much capacity as our customers demand. i/o is in a forever inventory cycle delivering enterprise-grade, just-in-time data centers. 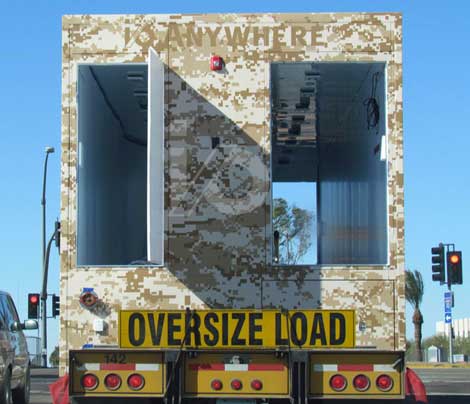 An i/o Anywhere data center IT module loaded onto a truck for transport to a customer.