Microsoft to Hosters: Move Up The Value Chain

<img src="/sites/datacenterknowledge.com/files/wp-content/uploads/2010/09/microsoft-curtis.jpg" width="470" height="353" /> Is Microsoft a partner or rival for its hosting provider customers? At the Tier 1 Summit, Microsoft's Elliot Curtis urged web hosting companies to see the relationship with Microsoft as one presenting opportunity, not risk. 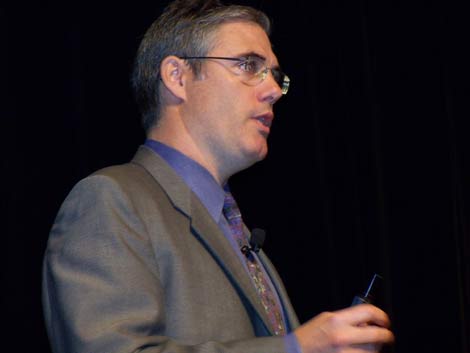 Microsoft's push into online services has required a balancing act in its relationship with the hosting industry. On the one hand, Microsoft has far-reaching ambitions to deliver cloud services to consumers and businesses. At the same time, Microsoft sells nearly $1 billion a year in licenses and services to web hosting providers.

So is Microsoft a partner or rival for its hosting customers? In addressing the Hosting & Cloud Transformation Summit on Tuesday, Microsoft's Elliot Curtis emphasized that Microsoft doesn't view itself as competing with its customers in the cloud computing realm - and, Curtis said, hosting providers shouldn't either.

Curtis sought to position Microsoft's relationship with hosters as one presenting opportunity, not risk. "We're a global provider with our Azure platform, but we'll also take the learnings and innovation from that and deliver them to the marketplace to provide building blocks for our customers," he said.

But he also predicted that some hosters may struggle with the pace of change and infrastructure requirementsfor the expected cloud transition."We understand that hosters have been pioneers in this space," he said. "We get that. You really have been leaders. But make no mistake: this business is accelerating."

Curtis said Microsoft believes as many as 30 million servers may move into the cloud, requiring hundreds of billions of dollars in investment in infrastructure to support these workloads. "Are you in the hosting business, or in the IT service delivery business?" Curtis asked. "Think about moving up the value chain and delivering IT as a service. Our goal is to evaluate what we do well, and also what our partners do well."

12 to 18 Months on Azure Appliances
While predicting a fast-moving transition to the cloud, Curtis reported deliberate progress on a key component of Microsoft's Azure-based offerings for service provider partners, the Windows Azure Appliance.

"It's a container we will put in a service provider's data center," said Curtis. "It's still a service we're delviering, even though it's in a customer's data center. We will operate that Azure environment and do the patching and updating.

"We are in very, very early days with our appliance.," he said. "We expect that over the next 12-18 months it will become more available."