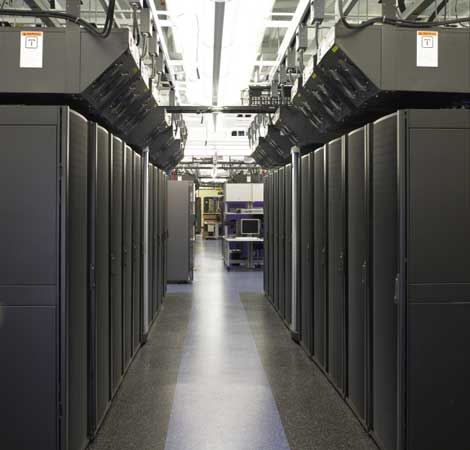 How do you squeeze 165,000 square feet of data center infrastructure into a 700 square foot bag? By applying the full gamut of energy efficiency and consolidation technologies at your disposal.

That's what Sun Microsystems (JAVA) says it has accomplished in a data center project that consolidated legacy facilities on its former StorageTek campus in Lousiville, Colo. into a cutting-edge site in Broomfield, Colo. In addition to a complete hardware refresh and server virtualization, the company used free cooling, closely-coupled in-rack and rack-top cooling, and flywheel UPS systems to save energy and space.

The payoff: Sun estimates that it will reduce its electricity bill by 1 million kWh a month, for a total annual savings of more than $1million a year. Sun also says that by building a smaller footprint, it saved the equivalent of $4 million in data center construction costs. 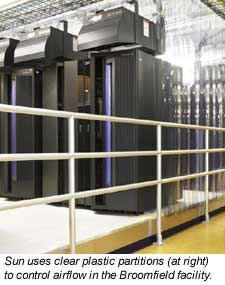 "The Broomfield data center showcases revolutionary data center design with the latest in modularity, scalability and flexibility to drive incredible efficiencies in cost, electricity and overall carbon savings," said Dave Douglas, senior vice president of cloud computing and chief sustainability officer, Sun Microsystems. "As a company we've achieved our first 20 percent reduction in electricity usage since 2002, and the Broomfield data center is a great step forward in meeting our goal of another 20 percent reduction."

Sun needed to consolidate space after it sold the huge StorageTek site in Louisville to ConocoPhillips last year in a secretive deal (which prompted rumors that Google was the buyer).

As part of its design, Sun went with a slab instead of a raised floor, and then used in-row cooling and racktop units, including the first installation of Liebert's advanced XD cooling system with dynamic cooling control, which can support power densities of up to 30kw per cabinet.

Sun used a pod design, but segmented the pods using clear vinyl curtains as dividers rather than walls, retaining a modular approach while allowing for reconfiguration down the road . It also used energy-efficient chillers, and eliminated batteries with a flywheel UPS system.