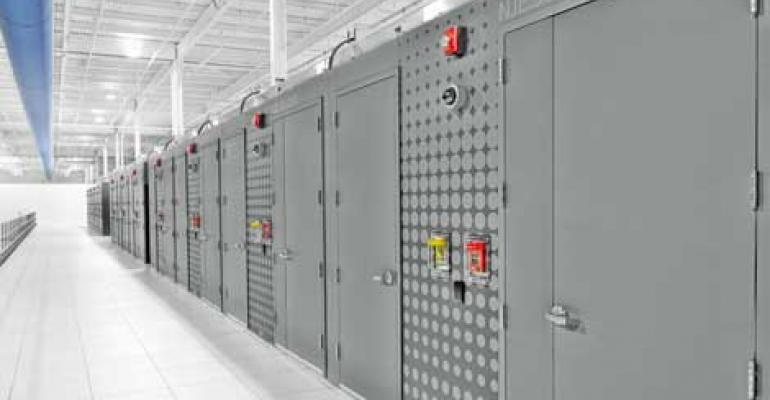 Provider has deployed dozens of modular data centers in its massive facility overlooking the New Jersey Turnpike in Edison, establishing itself as a major player in the highly competitive New Jersey market.

EDISON, N.J. - The view from the balcony overlooking Hall 2 of the IO New Jersey data center tells the story of the company's progress.

Two years ago, this vast hall was nearly empty, with several container-style modules tucked in a corner. Today there are dozens of modules housing servers and storage, deployed in row after row across the hall.

This 829,000-square-foot building overlooking the New Jersey Turnpike was once a printing plant for The New York Times. It now serves as the East Coast beachhead for IO and as a proving ground for the company's bid to transform the way data centers are built and deployed.

IO has been a pioneer in the market for modular data centers built in a factory using repeatable designs that can be shipped to either an IO data center or a customer's premises. The company has also developed its own software to manage IT infrastructure.

After building a large installed base of modular data centers in its home base of Phoenix, IO introduced its offering in New Jersey, where it was the first service provider to offer pre-fabricated IT infrastructure.

"When we had the first few modules installed, some people thought it was a science project," said Jason Ferrara, vice president of marketing at IO.

That curiosity has given way to sales. IO says it has deployed 88 data center modules in Edison, each representing between 200 and 400 kilowatts of IT capacity.

Back in 2011, we noted that IO New Jersey would serve as the first major test of whether modular data centers represent a major disruptive force in the multi-tenant market or become a niche market for specialized requirements.

New Jersey is one of the most active data center markets in the country, boosted by its proximity to Wall Street and the state’s robust supply of healthcare firms and enterprises. It's also one of the most competitive, with virtually all of the industry's major players locking horns. That's a key difference from Phoenix, where IO is the dominant provider.

Tenants in IO New Jersey include investment firms like Goldman Sachs and Allianz and service providers like Fortrust, Ajubeo, CCNet and Nothing But Cloud. A major travel site and a Bitcoin mining operation also have space in the Edison facility.

New Jersey hasn't always been an easy market for new entrants. Wholesale specialist DuPont Fabros Technology entered just before IO did and has taken three years to sell 11 megawatts of space in its Piscataway facility.

At the time, the new arrivals left the perception of an oversupply of space. But new players continue to arrive. Internap and CoreSite have both opened facilities in north Jersey, and Digital Realty has begun building a new campus in Totowa.

Given that competition, the deployment of 88 modules at IO New Jersey suggests the state's data center customers are growing comfortable with modular designs as an alternative to traditional raised floor space.

Playing at all levels of the market

One factor helping IO, Ferrara says, is that its offerings allow it to play at all levels of the market. IO offers colocation by the cabinet within multi-tenant modules, leases dedicated modules for wholesale-style requirements and also operates its IO.Cloud service in Edison.

"This is a competitive space," said Ferrara. "For us, having visibility across modular, colo and cloud is an advantage. We have strong competitors in each of those areas, but we can accommodate customers around any of them. Our question is ‘what are your application requirements?’”

IO's cloud is powered by OpenStack and runs on servers and storage from the Open Compute Project. The company is positioning its cloud as an alternative to pushing data to Amazon Web Services (AWS).

“We know that AWS is pushing hard to get into the enterprise," said Ferrara. "For customers who are dipping their toe into cloud, they can easily push workloads across a cross-connect within the data center. There’s no traversing the public Internet or paying data transfer costs. It’s colo-to-cloud within the same data center. We’re starting to see that as a differentiator.”

IO New Jersey is among a small number of modular facilities optimized for multi-tenant operations. Other examples include CapGemini’s Merlin data center in the UK, a Tier 5 facility in Australia, and Colt data centers in Europe.

The data center's site overlooking the Turnpike is significant, as the highway access simplifies delivery of the IO.Anywhere modules, which are built in the company’s factory in Phoenix. The 42-foot modules, which weigh as much as 25 tons, are loaded onto trucks for the cross-country journey to New Jersey, where they enter the building through a 20-by-20-foot entrance and wheeled into position.

The company has filled nearly all of its first phase and a large chunk of Hall 2. But there's plenty of room to grow, as the cavernous third and fourth phases of the building are even larger and can bring the total capacity to 650 modules and 108 megawatts of power.