<img src="/sites/datacenterknowledge.com/files/wp-content/uploads/2010/11/modular-tier5-web-470.jpg" width="470" height="313" /> The Dell Modular Data Center (MDC) is positioning the company for a changing environment in which servers are delivered by the rackload, and sometimes by the container. We get a look inside the facility where Dell commissions its modular units. 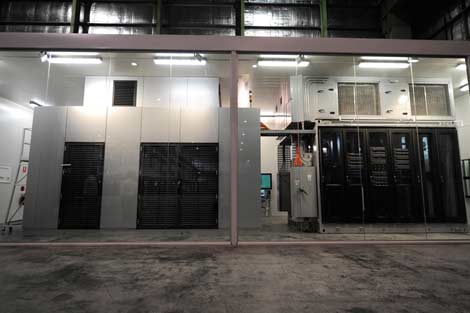 In a building not far from its Austin headquarters, Dell has created an assembly line for a different kind of  data center. The process begins with individual components, like network cables being lined up for staging. In some cases, it ends with more than 1 megawatt of data center capacity rolling down the highway on large trucks.

The new Dell Modular Data Center (MDC) is one example of how Dell's Data Center Solutions unit is positioning the company for a new environment in which  servers are delivered by the rackload, and sometimes by the container.

This model promises to accelerate deployment time for data center capacity, shifting the racking and testing of servers from the customer premises to the manufacturer. As modular designs gain traction, facilities like Dell's Austin site are where many of the gains in deployment time will be realized.

Big Orders for Big Customers
The Data Center Solutions (DCS) unit's focus on modular products reflects its mandate of filling big orders for big customers with specialized needs. The emergence of cloud computing has set apart the requirements of the largest cloud builders, who operate at enormous scale. The DCS team works closely with these customers to optimize servers and storage for their applications, which may run across thousands or even tens of thousands of servers.

"The Modular Data Center is for customers who really get the benefits  of scale," said Andy Rhodes. Marketing Director for Dell DCS. "This isn't just 'container fever.' We're taking a very focused approach to the market."

The volume of customers seeking modular units isn't huge. But some of their orders are.

"We've been very successful with a very small number of customers," said Ty Schmitt, the Lead Architect for Modular Infrastructure at DCS. "Right-sizing is the driving principle behind modular data centers."

Modules Offer Flexibility
Dell's modular offering has been designed to provide customers with maximum flexibility. The MDC  can be configured with one or two rows of servers and storage, and offers a variety of modules to customize cooling systems and UPS architecture. The MDC can operate indoors or outdoors, and allows customers to expand at their own pace by adding additional units, which Dell says can be deployed within 30 days of  site readiness.

That's where the test facility enters the picture. Workers test servers and pack them into racks. Networking cables are organized and plugged in. At one station, custom cardboard sheets are folded origami-style and inserted into the rack to create a channel that converts the side-to-side airflow of network gear to a front-to-back airflow. "It's a $2 part that can save kilowatts in a data center," said Schmitt.

It's also where MDC units and modules are put together and commissioned, typically using load banks, which simulate the power usage of a rack of servers.  Each MDC can house 12 racks with up to 2,500 servers, and can support up to 500 kilowatts of power capacity.

How Big is the Container Market?
The market for containers and modular designs has been difficult to quantify, in part because many customers disclose little about their data center operations. Early use cases for containers focused on mobile operations and scale-out deployment of massive server farms for Microsoft and Google. But as the design has advanced beyond the standard hard-shell  ISO container, different models come into play.

One example is Australia's Tier 5, which was the first customer for Dell's MDC offering. Earlier this month it unveiled its Dell-designed modular units at a new data center in Adelaide that will serve primarily resellers and managed hosting providers - customers that may have varied requirements for hardware and design. The ability to customize MDC units to each customer's requirements is a key attraction for Tier 5.

That flexibility enables new types of facilities. Tier 5 has converted a former Mitsubishi auto plant into a warehouse-like structure with an open floor plan to accommodate the modular units. Tier 5 says it can deploy up to 22 modular units at the facility, and also liked the capability of deploying at a customer site if needed.

"We were looking for a solution that allows data center infrastructure to be deployed quickly and predictably," said Marty Gauvin, the founder of Tier5. "We wanted the ability to go to any customer, anywhere, and install a wide variety of equipment."

It's an example of how one new type of facility can enable another - all the way from Austin to Adelaide. 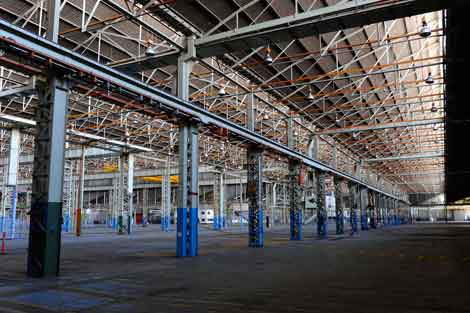 A view of the interior of the Tier 5 data center facility in Adelaide, which will house Dell Modular Data Center units.