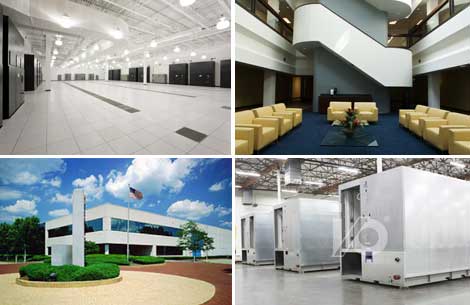 The bottom line: There's a larger supply of data center space than usual, particularly for wholesale space in central New Jersey, where three leading providers are competing for customers. That imbalance is noteworthy given the recent history of the data center market, which has become known for low vacancy rates and a disciplined approach to capital spending and new construction.

Data center developers say pricing remains firm, and assert that some analysts have overstated the "vacancy rate" by mixing product types and including projects that are not operational. Industry watchers say there continues to be strong demand for managed hosting and colocation space offering low-latency connectivity, a key sector in northern New Jersey.

But real estate brokers warn that if the new wholesale supply isn't absorbed quickly, providers may be tempted to discount space to fill their facilities. There's also a wild card in the market: the emergence of modular data centers, which are featured in a new project in Edison.

Data center analysts get nervous when they see a flurry of data center construction, as the memories of the overbuilding and data center glut from the dot-com bust of 201-2003 have left scars on the industry and its investors. Subsequent improvements in phased construction, along with limited access to capital, have limited the prospect for overbuilding. Some observers say concerns about supply are real, but describing the NJ inventory as a "glut" may be overkill.

"I think 'glut' is both sensational and untrue," said Dan Golding, a managing director at DH Capital. "Power and space are being absorbed at a reasonable pace, but so much dropped on the market at the same time that it has created problems in the short term."

The story of the New Jersey market is likely to be driven by the fate of two projects: the DuPont Fabros NJ1 facility in Piscataway, and the i/o New Jersey project in Edison. DuPont Fabros (DFT) is seeking to lease 14 megawatts of wholesale space, a challenge in a market dominated by enterprise customers with lengthy decision cycles. Meanwhile, the even larger i/o project will make New Jersey the proving ground for whether modular data centers represent a major disruptive force in the multi-tenant market, or a niche market forspecialized requirements.

New Jersey is one of the most active data center markets in the country, boosted by its proximity to Wall Street and the state's robust supply of healthcare firms and enterprise users. The New Jersey market has traditionally focused on colocation facilities and single-tenant data centers in several northern counties located directly across the Hudson River from Manhattan. In recent years that has expanded to include a growing market for wholesale data center space in central New Jersey.

"This was, in part, because people saw (colocation providers) Equinix and Savvis getting some great rates from their financial customers," said Golding. "However, those were specific rates to the low latency/high frequency market and have not been achievable for other folks."

The result, according to Everett Thompson of Wired RE, is that while demand remains strong for colocation and managed services, the market for wholesale space is "in significant over supply. Most of the new supply falls within the wholesale segment, insulating retail and value-add participants, like Datapipe and Cervalis, from much of the fall out."

"Our view of the New Jersey market is that supply and demand for built-out data center space is in a healthy equilibrium," said Mike Foust, the Chief Executive Officer of Digital Realty Trust (DLR). "We see consistent demand from companies in the financial services vertical as well as managed services and colocation providers whose businesses are expanding rapidly."

Thompson of Wired RE agrees that demand from service providers remains strong. "Second-tier hosting firms and managed service providers are rapidly expanding into the market, leveraging the turnkey real estate of DuPont, Sentinel and others as a platform," he said. "This has the positive effect of growing the market overall, and creating a more efficient ecosystem."

What has changed, Thompson said, is the supply of wholesale space. "Historically, the premium colocation segment in the NY/NJ market has been approximately 18 to 20 megawatts per year, with financial entities making up over 50 percent of the market," said Thompson. "The new supply will certainly grow the market beyond these figures, but our view is that the capacity additions are too much, too quick, creating downward pricing pressure."

Foust says that the amount of available data center space in New Jersey has been inflated  by the announcement of projects that don't offer finished, usable space. "There is some confusion over announcements by developers of potential projects that currently are vacant, unimproved warehouses and land parcels," said Foust. "Until those projects are actually constructed - at substantial cost of over $1,000 per square foot - we do not consider them to be competitive product."