KEFLAVIK, ICELAND - Verne Global, which announced a cloud launch this week by client Datapipe and its client risk-modeling specialist RMS, is uniquely positioned from a geographical and business perspective. Its position close to the Arctic Circle in Iceland provides outside-air cooling year-round. Additionally the country's power industry, which uses natural resources (hydro and geothermal) to produce electricity, have been able to agree to long term power contracts with Verne Global ensuring price stability for up to 20 years. Built on a decommissioned NATO base, the nondescript building is the home to highly-dense compute power and hundreds of terabytes of storage. This, in addition to connectivity to Europe and the United States, drew Datapipe and its client RMS to use the facility for its new risk-modeling cloud platform.

Below are photos of the Verne Global Data Center taken on a tour of the facility this week. Click on the photos for larger versions. 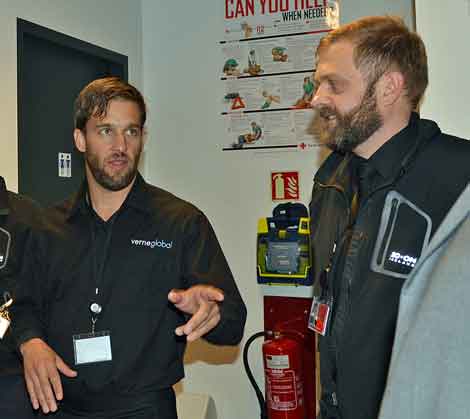 Tate Cantrell, CTO, Verne Global, led the tour group through the data center facility. In the lobby, he pointed out that the facility, located outside the capitol of Reykjavik, uses nine layers of security and tightly adheres to security protocols. (Photo by Colleen Miller.) 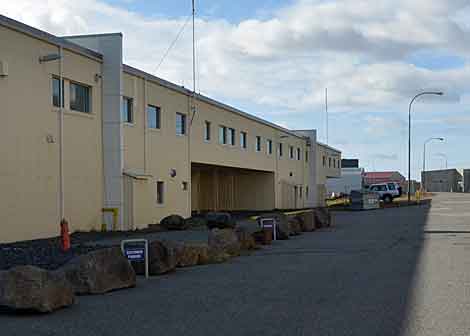 The exterior of the approximately 40,000 square foot facility.Being built on a former NATO base, it is unlikely to be near volcanic activity and resulting ash. However, the air is monitored for particulates, just in case. (Photo by Colleen Miller.)

The facility uses power from two Icelandic power producers, whose grids are very stable and reliable. But there are four generators on site, one for each data hall, and one back-up. The facility is a very green operation, considering the sources of power are hydro-electric and geothermal. The small carbon footprint of the facility is created by the diesel-operated back-up generator testing. According to Cantrell, they have 96 hours of fuel on site in case of an outage of the both electrical grids. There is also an electrical substation on the property. (Photo by Colleen Miller.) 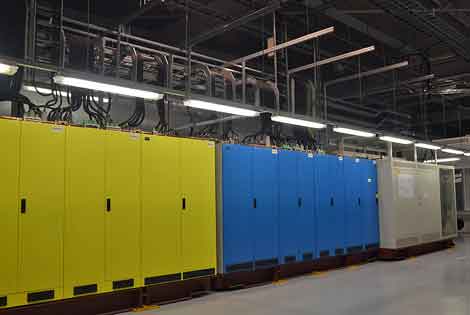 Inside the facility, the dual power systems are color coded with yellow and blue. (Photo by Colleen Miller.) 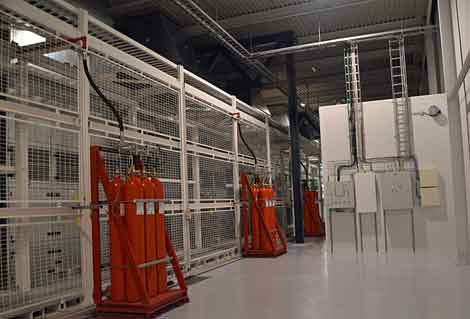 The power equipment room features compressed gas tanks for the fire suppression system, which uses Nitrogen and other gases already in the normal air mix to push oxygen out of the area on fire. In the event of a fire, the tanks would push the oxygen out of the data hall, thus putting out the fire, but giving staff enough time to leave the room. (Photo by Colleen Miller.)

For more on Verne Global's data center, continue to the Next Page.

KEFLAVIK, ICELAND – Inside the Verne Global Data Center, there are features that are standard to any data center. Lots of power equipment and cables, networking infrastructure and cabling, security, and so on. There's also some features not seen in every data center, such as outside air cooling and laser sensors checking for particulates in the air. Another unique feature of Iceland is a consistent dewpoint, which means very little water needs to be used to add humidity to the air in the data halls. This page continues the tour of the facility given by Verne Global CTO Tate Cantrell. 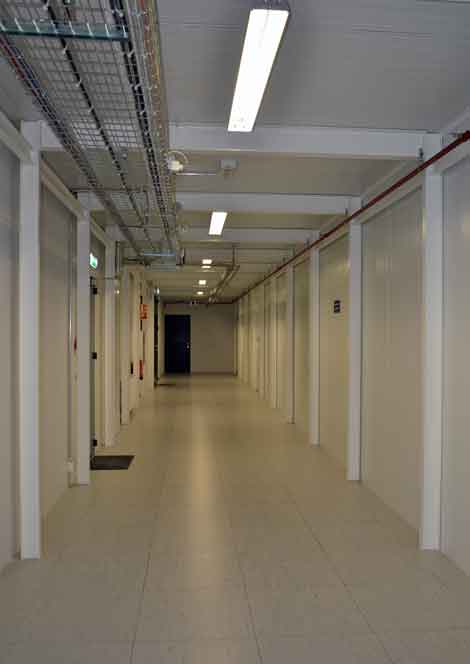 This photo gives an idea of the length of part of the Verne Global data center. Pipes and cables run through the hallway. The door to the data hall is marked with prohibitions, such as no photography, no eating and no drinking. (Photo by Colleen Miller.) 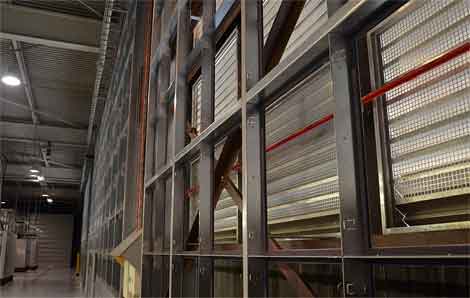 A side-long view of the outdoor air system. The cool Icelandic breeze enters the infrastructure envelope through these louvers. The red piping is the laser system which detects any particles in the air and would cause the system to initiate closure of the system if particles are detected. The louvers are shuttered and air can be recycled within the facility to keep out particles. In terms of temperature control, the difference from other data centers using outdoor air in the States, being in Iceland, the air is often mixed with a bit of "hot aisle" air to raise the temperature a bit before being sent into the pressurized cold aisle, according to Cantrell. (Photo by Colleen Miller.) 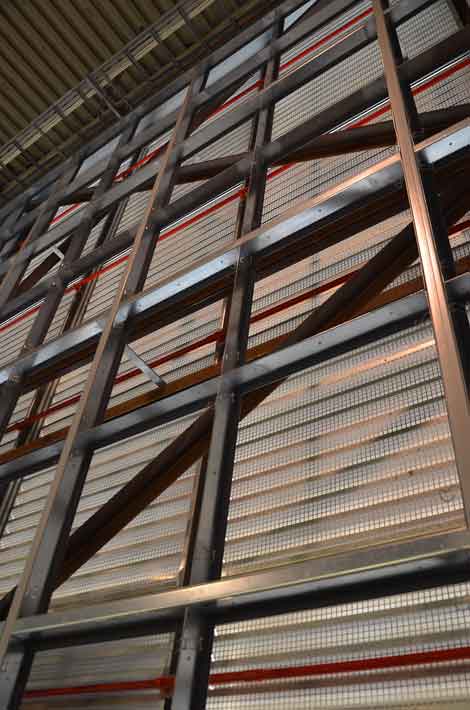 A close-up vertical view of the air intake louvers. These louvers can be switched for blanking panels to reduce air-flow. Cantrell noted that in winter, he will have 75 percent of the air intakes blocked with blanking panels. Icelandic winters are moderated by to the warmth of the jet-stream, but the air temperature in the data center is carefully controlled. Verne follows the ASHRAE recommended envelope for temperature in the data hall to be 18-27 degrees C and usually runs at 20 degrees C. (Photo by Colleen Miller.) 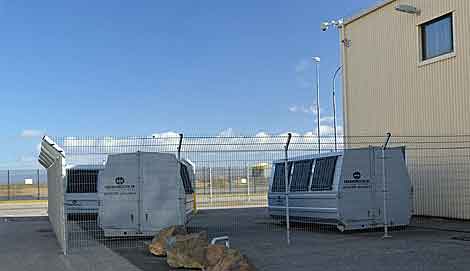 The security is carried out to a high degree, even the waste and recycling bins are fenced. Note camera on upper side of building, too. (Photo by Colleen Miller.)