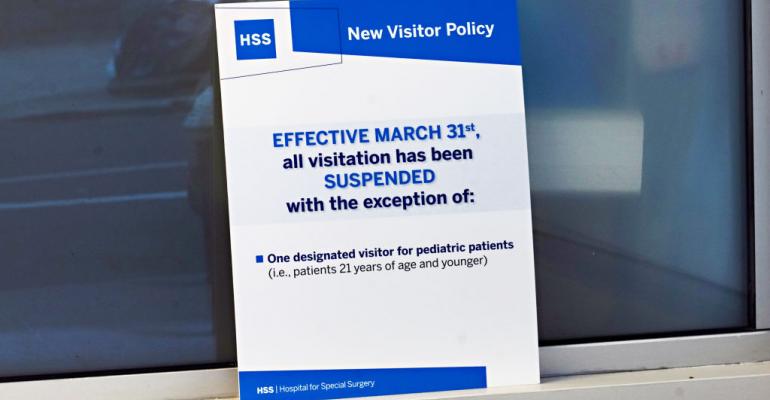 A New York Hospital ‘Pivoted’ for COVID-19; IT Had to Keep Up

Hospital for Special Surgery CTO shares his team’s experience at the pandemic’s peak in the city.

Hospital for Special Surgery in New York City specializes in orthopedic surgery and rheumatology. Orthopedics, its bread-and-butter, was on the list of “non-essential procedures” Governor Andrew Cuomo ordered hospitals to stop around mid-March.

But the hospital had to “pivot” to take in acute-condition patients from other hospitals that didn’t have enough beds, and eventually also COVID-19 patients, Bashir Agboola, HSS VP and CTO, recalled.

Agboola shared his team’s experience from the time New York was the coronavirus pandemic’s ground-zero while sitting on a panel for the DCD New York conference, held virtually last week.

Operating rooms had to be converted into intensive care units. They had to be fit out with video monitoring solutions to limit the amount of times staff needed to enter. The infrastructure supporting telehealth had to be scaled. Everything had to be secured.

The hospital had to procure hundreds of laptops immediately to send workers home with – at a time when many other big organizations needed to do the same, and vendors were scrambling to fulfill orders.

Luckily, “we had some very understanding partners,” who appreciated that a “healthcare organization in the middle of the pandemic – at the center of the pandemic at the time in the country” – needed all the help it could get.

Only one percent of HSS employees worked from home prior to the pandemic. Thirty percent do now.

To support this 30-fold increase, Agboola’s team needed to scale up VPN capacity as well as the amount of people its Citrix Storefront (remotely accessed enterprise app store) instance could support.

All this put a lot of strain on the hospital’s IT support infrastructure. (“Folks working from home tend to have issues,” often with their local infrastructure.) HSS created a dedicated Level 2 support team to cater to the needs of remote workers.

The hospital has been slow to deploy workloads in a public cloud, Agboola admitted, and the pandemic crystallized how much easier things could be, had more of its infrastructure been in the cloud.

“In the past few months, I would say, we’ve increased our reliance a little bit more on the cloud,” he said.

Since the start of the pandemic, we’ve heard from top IT executives from several big companies, including Zoom, Netflix, and BlueJeans by Verizon, who attributed their networks’ ability to weather the massive shifts in traffic patterns as work, school, and entertainment moved online to their use of public cloud services.

HSS’s voice communications infrastructure is hosted mostly on premises, in its own data centers. Had the hospital been using a cloud-based contact center, changes that were necessary to support more people working from home would have been a lot easier to make, Agboola said.

At the start of the crisis, his team halted many of the regular projects it had been doing inside its on-prem data centers, which led to fewer outages. Human error while changes are being made to infrastructure is a leading cause of data center outages.

Now, as the wave of infections in New York has subsided and some of the past work patterns have been reestablished, there’s been a “return to the traditional pattern of outages driven by changes to our on-prem infrastructure,” Agboola said.

Today, HSS has a few contact centers hosted in the public cloud, and some more projects are in the works, expected to go live soon, he said.

The crisis has “lent more credence to the need to move more workloads to the cloud.”

Telehealth Finally Gets Its Moment

Greater reliance on public cloud services is one of the things Agboola expects to stick around after the COVID-19 pandemic is behind us. Another thing, and this applies to the healthcare industry in general, will be much greater use of telehealth.

Virtual healthcare technology has been around for years, “but it never took off to potential,” he said. This crisis is the moment telehealth finally takes off.

Normally, HSS doctors conducted just over 100 weekly telehealth patient visits. At the end of March they were seeing close to 2,000 patients per week virtually, and by May they were up to 4,500.

HSS isn’t the only hospital seeing such enormous growth in telehealth usage. “I’ve seen similar figures for other hospitals in the New York metro area,” he said.

The number of weekly telehealth visits is beginning to level off, but he estimates that it won’t dip much below half of what it was at the peak. Telehealth struggled with adoption before the pandemic, but “now it’s here to stay,” Agboola said.