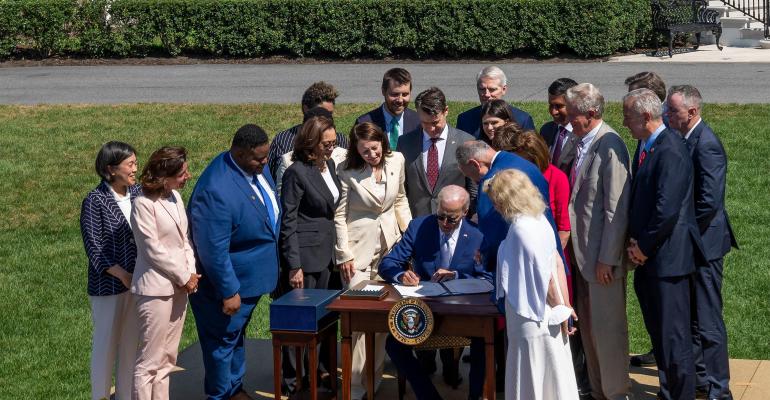 In August 2022, President Joe Biden signed into law the CHIPS and Science Act, which aims to bolster chip manufacturing in the U.S. and further advance research and development in the domestic semiconductor industry. Since then, the sector has been experiencing a flurry of funding.

According to the Semiconductor Industry Association, the passage of the CHIPS Act has resulted in:

Here’s a roundup of investments spurred by the CHIPS Act and what it means for the world of chip manufacturing.

To address supply chain shortages and meet surging demand, chip manufacturers are unveiling plans to build new semiconductor fabs in the U.S. For instance, Micron is expected to leverage its government grants and credits as it invests $40 billion into memory plants by 2030. The company will also construct a $100 billion megafab in New York — calling it “the largest semiconductor fabrication facility in the United States” — with funding incentives from the State of New York.

Meanwhile, in the heels of the CHIPS bill’s enactment, semiconductor company Qualcomm and chip manufacturer GlobalFoundries announced that they are “more than doubling” their current semiconductor manufacturing agreement, thereby securing “wafer supply and commitments to support U.S.-based manufacturing through capacity expansion” over the next five years.

Big tech firms are also getting in on the action. Apple plans to source one-third of its advanced chips from TSMC’s Arizona plant by 2024, urging the chip giant to produce 4-nanometer chips. Other large chip firms such as AMD and Nvidia intend to manufacture some of their semiconductor chips at the Arizona plant as well, calling on TSMC to further advance its chip production.

South Korean packaging company SKC will shell out $600 million to build a semiconductor substrate factory in Georgia, according to reporting from Global Atlanta. The first phase of construction is planned for completion by December 2023 and the second phase by 2025, bringing in over 400 jobs.

The factory will be producing a glass substrate that could boost chip computing power while reducing power consumption — a potential game-changer in high-performance computing. In fact, the technology has been tested in a Seoul data center, resulting in a 50% decrease in power consumption.