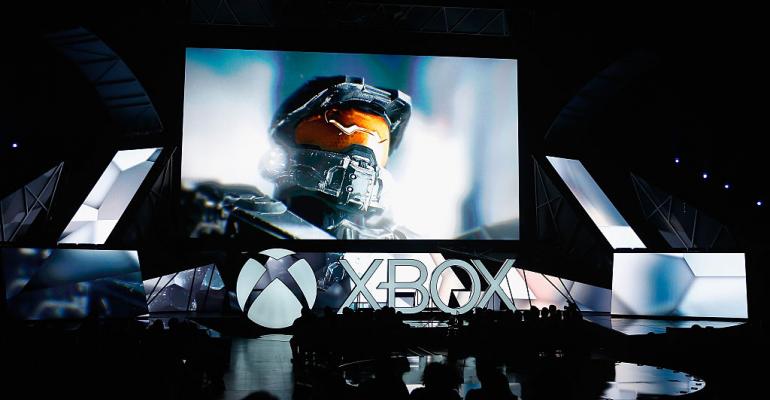 How Do You Play 'Halo' on a Phone? Stream It From an Azure Data Center Nearby

Add videogame streaming to the list of workloads that will be driving hyperscale data center expansion in the coming years.

On Monday, Microsoft shed some more light on a game streaming service it’s had in the works since at least last year and said it expects to launch public trials next year. The company’s blog post and publicity push about the service came exactly one week after Google said it was working on game streaming too.

Microsoft CEO Satya Nadella appears to have had a change of heart about the role gaming should play in the company’s strategy. He’s gone from saying gaming was important but not core to Microsoft’s mission in 2014 to calling gaming “our expansive opportunity” on an earnings call this July.

The company now wants to expand the reach of its video games beyond people who own its Xbox consoles. The goal is to enable players to stream any game to any device, be it their smartphone (connected to an Xbox controller via Bluetooth), tablet, or PC.

Streaming videogames is much more complex and resource-intensive than streaming video or audio. As Catherine Hsiao, a Google product manager, put it:

The idea of streaming such graphically-rich content that requires near-instant interaction between the game controller and the graphics on the screen poses a number of challenges. When streaming TV or movies, consumers are comfortable with a few seconds of buffering at the start, but streaming high-quality games requires latency measured in milliseconds, with no graphic degradation.

The technology and creativity behind these AAA video games is extraordinary—from incredible detail and life-like movement of the characters’ skin, clothing, and hair, to the massive scale of the world in which the game unfolds, down to every last blade of grass. Every pixel is powered by an array of real-time rendering technology, artistry, visual effects, animation, simulation, physics and dynamics.

That means not only will success in this space depend on streaming companies’ technological brainpower but also on the sheer scale and capacity of their data center infrastructure. As one analyst recently pointed out to Wired, the companies who are best positioned to become videogame streaming aggregators when the technology is ready will be ones that “already have a good brand in gaming and a robust cloud platform.”

There are many big gaming brands, but only a handful of hyperscale cloud platforms. As the Wired article says, the combination of Microsoft Azure and Xbox and the combination of Amazon Web Services and Twitch are the top contenders here. (Google has yet to make a name for itself in gaming.)

Microsoft appears intent on leveraging the billions of dollars it invests every year in Azure data centers to expand its gaming market share. Already – with streaming still at least a year away – the company’s gaming revenue for the first time ever surpassed $10 billion in the most recent full fiscal year.

“We are investing aggressively in content, community, and cloud services across every endpoint to expand usage and deepen engagement with gamers,” Nadella said on the call in July.

It doesn’t look like the engineers working on Project xCloud (the company’s codename for the game streaming effort) have fully settled on the hardware architecture that will support the service inside Azure data centers. But if the future production systems resemble anything like the prototype xCloud systems in the single rack currently sitting in one of the company’s Quincy server farms, commercial rollout of xCloud will require enormous computing capacity.

The current architecture packs components of four Xbox consoles inside a single server blade. It appears that one such console can only support a single game instance, which means a single compute node in a data center can only support four users at a time.

Now comes the tough part. First, the responsible Xbox-ish unit encodes a frame of the game that the user is playing, compressing it down and sending it over the network to the user’s device. Next, it sends any input from the user back from the device through the network—rationalizing it against any multiplayer activity that may be coming from other users’ devices—then renders the next frame, calculating the physics and lighting and audio and any other dynamic system that might change as a result of users’ actions.

The plan isn’t just to stream new titles as they come out. Microsoft wants to eventually “lift and shift” all 3,000 or so existing Xbox games. Its engineers have been developing new ways to encode and decode video, readying data centers, and bulking up network capacity, according to a Microsoft video about Project xCloud.

“We have it up and running today, and when we have it just right, we’re going to scale it out in an epic way and deliver it to the world,” one engineer said in the video: